If you’ve ever complained to friends about having an upset stomach, chances are one of them has suggested that you follow the BRAT diet, meaning that you follow a strict diet of a small list of foods until your symptoms subside. But you’re not going to find any books describing the plan or any cookbooks offering 101 recipes for meals on this regimen. Still, the popular diet dates back nearly 100 years. Here’s a primer on what you need to know about the BRAT diet, why it’s associated with tummy troubles, and whether it’s right for you.

What is the BRAT diet?

The BRAT diet meaning is simple. It stands for something very straightforward (well, bland, actually): BRAT is an acronym for bananas, rice, apples, and toast.

“Historically, the BRAT diet is a type of diet that we used to use for kids and adults who had infectious diarrhea,” says Tanya Altmann, MD, FAAP, a practicing pediatrician who founded Calabasas Pediatrics; an assistant clinical professor at Mattel Children’s Hospital at UCLA; and the author of Baby and Toddler Basics: Expert Answers to Parents’ Top 150 Questions. Because these specific foods are gentle on a sensitive belly, this plan has also been the diet of choice for those who are vomiting, nauseated, or feeling queasy. “This diet can essentially bind up the stool and help slow down the diarrhea,” Dr. Altmann continues. “It was designed to help the gut heal sooner and to help avoid dehydration.”

Altmann adds that there have been “record numbers” of flu and illnesses involving diarrhea this year, which may explain why the BRAT diet foods have become a topic of conversation again. “Most cases of gastroenteritis — which are stomach infections — that have been going around this season are viral, and noroviruses are actually the most common cause of stomach viruses,” she says. The norovirus infection, which occurs most frequently in crowded environments (like schools, hospitals, and cruise ships) is highly contagious and can cause the sudden onset of severe vomiting and diarrhea, according to the Mayo Clinic.

Is the BRAT diet healthy?

While the four binding foods on this plan are each perfectly healthy, the BRAT diet for diarrhea is generally considered an outdated, short-term eating regime. “Truthfully, it isn’t recommended anymore because the evidence to back it up was really weak,” says Altmann. “The more recent thinking is to let the illness run its course, and unless kids or adults are getting dehydrated, to get them back to eating a normal healthy diet as soon as possible because they need nutrition and strength in order to heal.”

In fact, the American Academy of Pediatrics has deemed the BRAT diet “too restrictive” and says that doctors no longer consider it the diet of choice for gastroenteritis. The academy reasons that even though the plan is comprised of easy-to-digest foods, the plan is not a nutritionally balanced diet due to its lack of protein, fat, and fiber.

“When you have diarrhea, we want to find out the cause, and we want to treat it,” adds Altmann. “However, if everything is coming out the other end, I will still use some of the principles of the BRAT diet.”

These days, Altmann often suggests the 21st century version of the BRAT diet for diarrhea. Aside from bananas, rice, apples, and toast, a few more items on the BRAT diet list of foods include applesauce, mashed or boiled potatoes, plain crackers, and sometimes low-fiber cereals (like Cream of Wheat or farina — anything with one gram or less of fiber), plus broth-based soups and eggs (not cooked in oil or butter, as fats can irritate the gastrointestinal system).

And then there’s yogurt. “I always recommend probiotics because there has been evidence that probiotics are beneficial to slowing down diarrhea and healing the gut,” says Altmann. 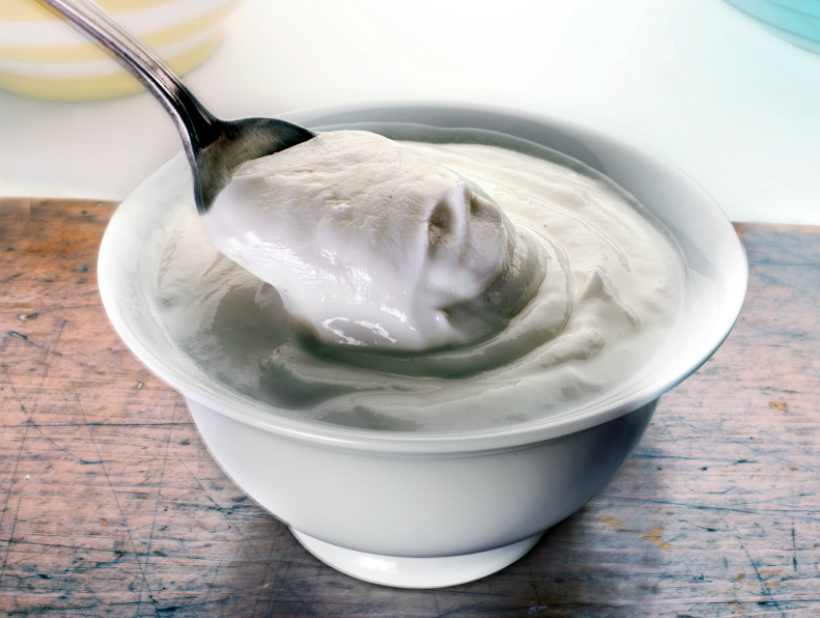 According to a 2011 study published in the American College of Gastroenterology, probiotics — bacteria or yeast that boosts the good bacteria in the digestive tract — may alleviate common symptoms and illnesses within the intestinal systems. Another study from 2011 discussed in the Journal of Clinical Gastroenterology indicates that foods containing probiotics, such as kefir and sauerkraut, may shorten the duration of a bout of diarrhea. You can add these as a side to any other BRAT diet recipes.

All other dairy foods, however, should be avoided when following a modified version of the BRAT diet. Why? Lactose — a type of sugar found naturally in milk, cheese, and other dairy products — can be difficult to digest. “I suggest switching to lactose-free foods for a few days,” adds Altmann. “But if you’re breastfeeding, then breast milk is the best thing for the baby.”

And speaking of sugars, anything sweet — candies, cookies, cake, and even fruit — is also off-limits on the BRAT diet list of foods. “Keep in mind that high-sugar beverages can make diarrhea worse, so you do want to avoid these drinks, especially apple juice and all fruit juices,” she encourages.

Can you lose weight on the BRAT diet?

Well, sure, BRAT diet weight loss is possible. But…

“In terms of losing weight, any diet that restricts your calories — in any shape or form — is going to cause temporary weight loss, yet nothing sustainable,” says Altmann. Given the lack of nutritional value on this plan, however, it has never been intended for long-term use, nevermind as a lifestyle. Therefore, using the BRAT diet for weight loss is not advised.

“The BRAT diet is not a diet to lose weight,” stresses Altmann. “It is not designed for anything other than when you have diarrhea.”

The same principles apply to a patient of any age, says Altmann. “The BRAT diet is for tightening up loose stools and making you more constipated,” she explains. “That being said, you don’t want to be on it for more than a few days because it will make you constipated.”

Adults on the alternative BRAT diet are advised to stay away from both very hot and cold food and drinks, as extreme temperatures may further aggravate the lining of the stomach and the intestines. In addition, caffeinated and decaffeinated beverages, along with alcoholic drinks, are potential laxatives, according to the International Foundation for Functional Gastrointestinal Disorders.

“The most important thing is to give your child plenty of liquids,” says Altmann. Along with water, she says that lactose-free milk and electrolyte-replacement drinks can help keep your child hydrated. “However, if you have a strong-willed toddler — as many are — anything he or she wants to drink is better than nothing, in the name of keeping the child hydrated.”

If using the BRAT diet for toddlers, she advises parents to keep an eye out for signs of dehydration — which include infrequent urination, dry skin, dry mouth, inability to make tears, sunken eyes, and extreme fatigue — in their toddlers. Altmann emphasizes that both children and adults who need to restrict themselves to the BRAT diet foods for a week should seek medical attention.

“Also, if someone is not able to keep fluids down and he or she is having diarrhea; and if the diarrhea is more than eight times a day,; if diarrhea is associated with blood and/or severe abdominal pain; or if there are signs of dehydration, you just don’t want to treat these symptoms with the BRAT diet or any diet,” she concludes. “There may be something more serious going on, like an infection, where medication or IV fluids could be necessary.”

Best News Ever: You Can Eat Pasta and Still Lose Weight, Study Finds

Her Heart Attack Didn’t Stop Her From Losing 100 Pounds