Don’t forget to grab your scarves and mittens before the Easter egg hunt this weekend, because meteorologists are calling for more frosty weather this holiday weekend. A string of brief but messy snowstorms are predicted to sweep across the north-central United States and last into early April, according to forecasters. The storms are set to travel from west to east, with Arctic air blowing through the North and Pacific air gusting through the South. 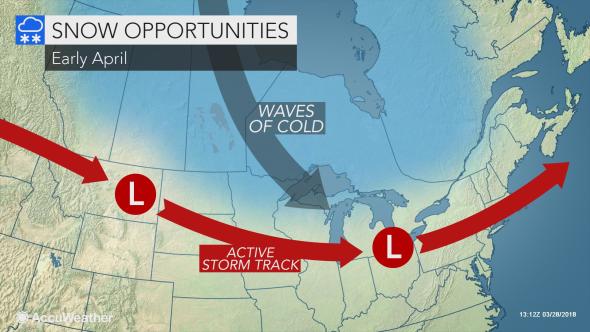 But don’t get too upset just yet: Because the storms will be “fast-movers,” meteorologists aren’t expecting the bad weather to stay too long. Snowfall is said to be in the one to six-inch range, with only a few spots on the map getting slightly more. Even more good news? The bright spring sunshine will work its magic against any snow pileup on the roadways. Even so, holiday travelers should be wary of slick roadways in the mid-morning and the early evening hours — just in time for pre- and post-dinner driving.

There’s also a bit of rain headed our way. Rain is expected fall south of the snow area with a wintry mix in between, according to forecasters. Thunderstorms may also creep their way into Easter weekend, occurring south of each storm track.

From Friday to Saturday, states between Montana and Michigan will see moderate snowfall, with the areas of Minot and Fargo, North Dakota, Duluth, Minnesota, and Marquette and Traverse City, Michigan receiving most of it. Snow is said to fall late Friday night to early Saturday morning in eastern Minnesota and western Wisconsin, leaving the roads slushy and wet. In other areas from eastern Wisconsin to northern Michigan, most of the snow will fall during the daytime on Saturday. Those traveling by air should expect delays due to gusty winds on Saturday, including major airports in Minneapolis, Chicago, and Detroit.

Next, learn some quick ways to warm up a cold home in the video below:

Your Winter Survival Kit: How to Bounce Back From the Longest January Ever