It’s that time of the year when many of us are thinking about getting shape — whether that means cutting back on calories, hitting the gym, or a combination of the two. And when it comes to inspiration, the Victoria’s Secret models are pretty high up most people’s list.

Sponsored
Why Aren’t More Women Doing This To Diminish Dark Spots?
This easy 3-minute routine can be done in the comfort of your home.
CLICK HERE

What does it take to get the body of one of the most sought after models in the world? I tried their diet and workout routine for six weeks to find out.

Being 5 feet, 2 inches tall with legs as thick as tree trunks and not even a hint of a waistline after having a baby a year ago, I wanted to see just how close I could get to achieving the perfect supermodel physique.

So, I turned to personal trainer Dan Roberts — the man known as the trainer for models and Hollywood A-listers who need to get into shape fast — for help. Dan has trained numerous Victoria’s Secret Angels, so he knows exactly what they need. 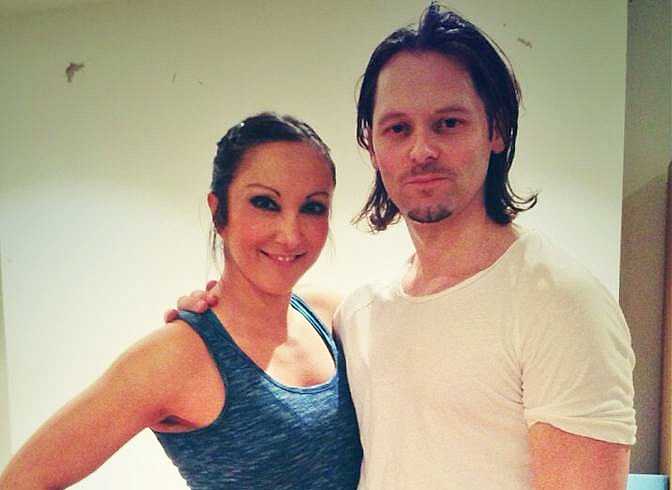 “The Victoria’s Secret models look is slim, but athletic, without being too muscular,” Dan explained when I went to see him for an initial consultation at his London studio. “They have to keep their waists narrow with oblique definition rather than a six pack, which means incorporating lots of twisting exercises.”

“Also, their thighs need to be firm but not overly muscular, so I use Romanian dead lifts to lift and tighten their glutes without pumping up the front thighs.”

I knew the training schedule was going to be intense, but when Dan told me I’d have to workout eight times a week — twice a week with him and six times a week at home using his online program — I was shocked.

In my first session with Dan, we focused on perfecting exercises such as deadlifts and lunges. In session two, we practiced some kick boxing moves. By the end of the hour-long session, I was shattered and collapsed onto the floor and dripping with sweat. 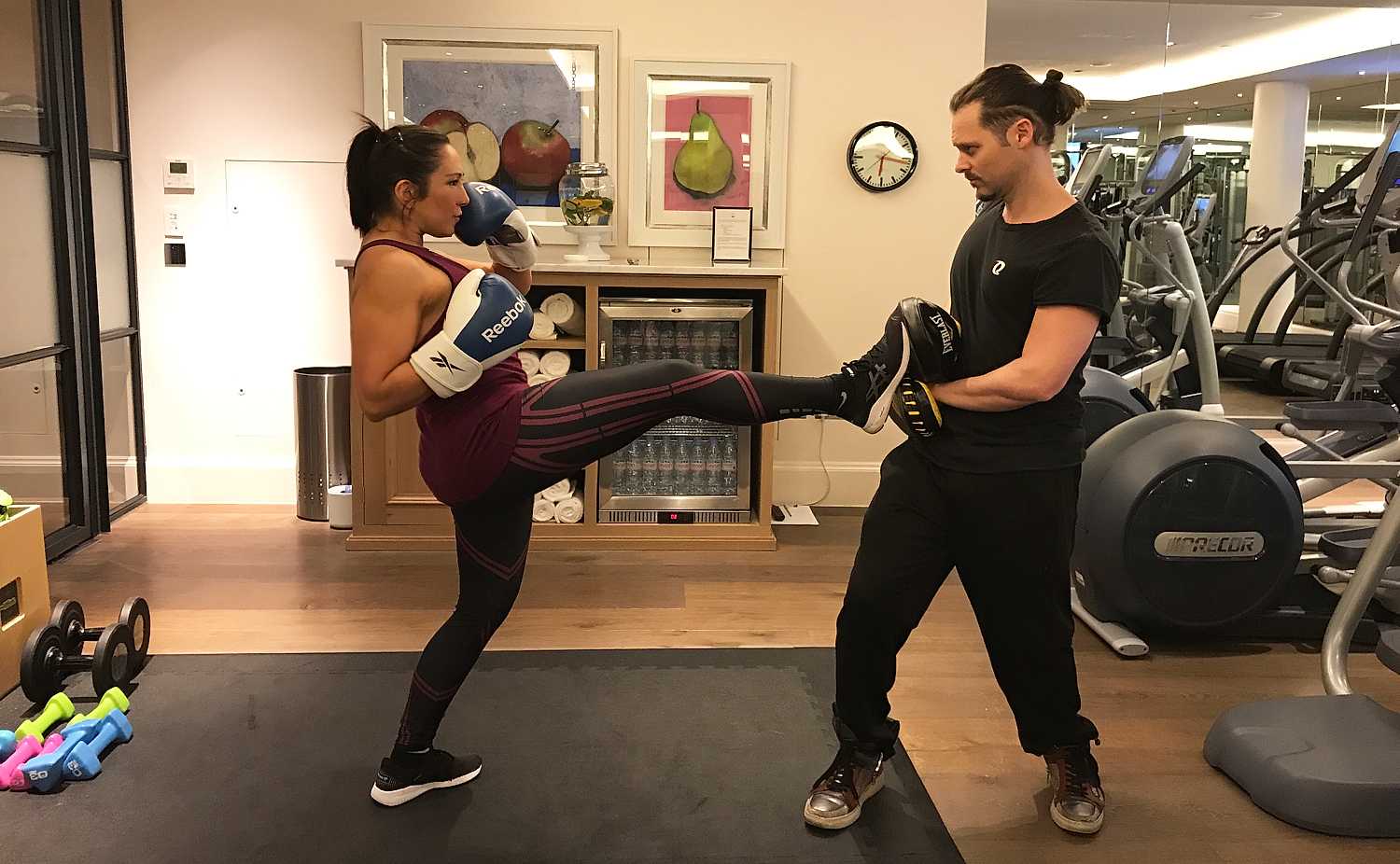 Week two was a mixture of fat-burning cardio and strength work, focusing on exercises such as jumping sumo squats, upright rows, jumping lunges, twisting shoulder presses, and press ups. Then we moved on to the heavy weights. The first time Dan put two 30-pound dumbbells in front of me to shoulder press, I thought he was joking. He wasn’t.

At home, I was following Dan’s online 28-day Methodology X training program, which was specifically designed with models in mind. The program starts off as a manageable 30 minutes of exercise per day, but builds up to tough hour-long interval training circuits after two weeks.

Signature moves on the plan included the “Superwoman” — a core exercise that involved extending the opposite arm and leg in a plank position — and the “killer” — a combination of a burpee and a press up that really got the heart pumping.

Following the right diet is essential, so Dan put me in touch with expert nutritionist Laurent Bannock who devised a 1,600 calorie food plan for me to follow. I had to cut out pasta, rice, potatoes, bread, and anything sweet, except fruit. My protein intake doubled, and I increased healthy fats such as olive oil and avocado.

Breakfast was oatmeal and berries with two eggs and a piece of fruit as a snack. For lunch I’d have fish or chicken with a salad. Dinner was steak, chicken, or turkey with vegetables, and then I’d have some cottage cheese with an apple and herbal tea before bed. 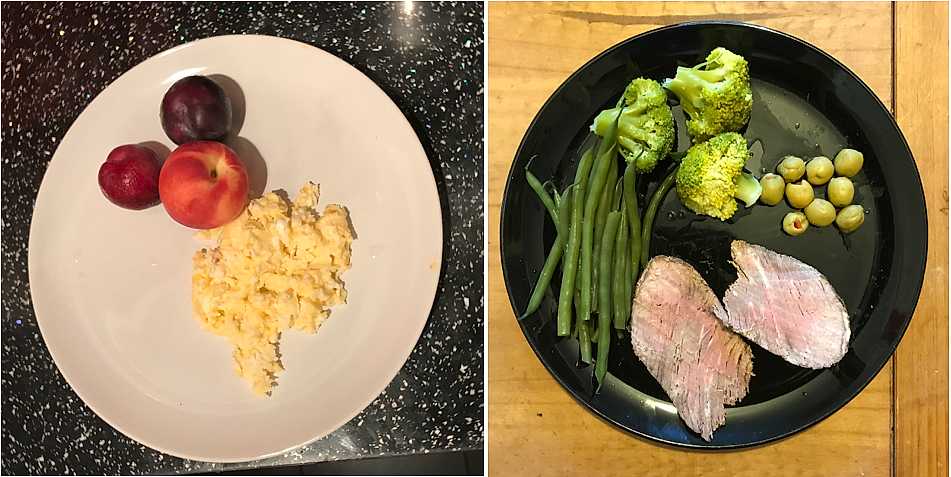 A typical breakfast and dinner on the plan. (Photo Credit: Nilufer Atik)

Alcohol, fruit juice, and carbonated drinks were banned, except a glass of wine once a week.

How hard is it to workout like a Victoria’s Secret model?

On the days I trained with Dan on top of my home workout, I was doing up to four hours of exercise in total, which was pretty intense (to say the least).

As a working mom there were times I found it super difficult to fit it all in. I’d try and do the home workouts when Milo (who is 15 months) went down for his 11 a.m. nap, but if he didn’t sleep for long or I had urgent work to do, it was a struggle to find the time. A couple of times I had to do my workout in the evenings — at times as late as 9: 30.

Childcare was also an issue. Sometimes I had to ask my father-in-law to watch Milo while I was at my personal training sessions as my partner, Matt, had to work late. 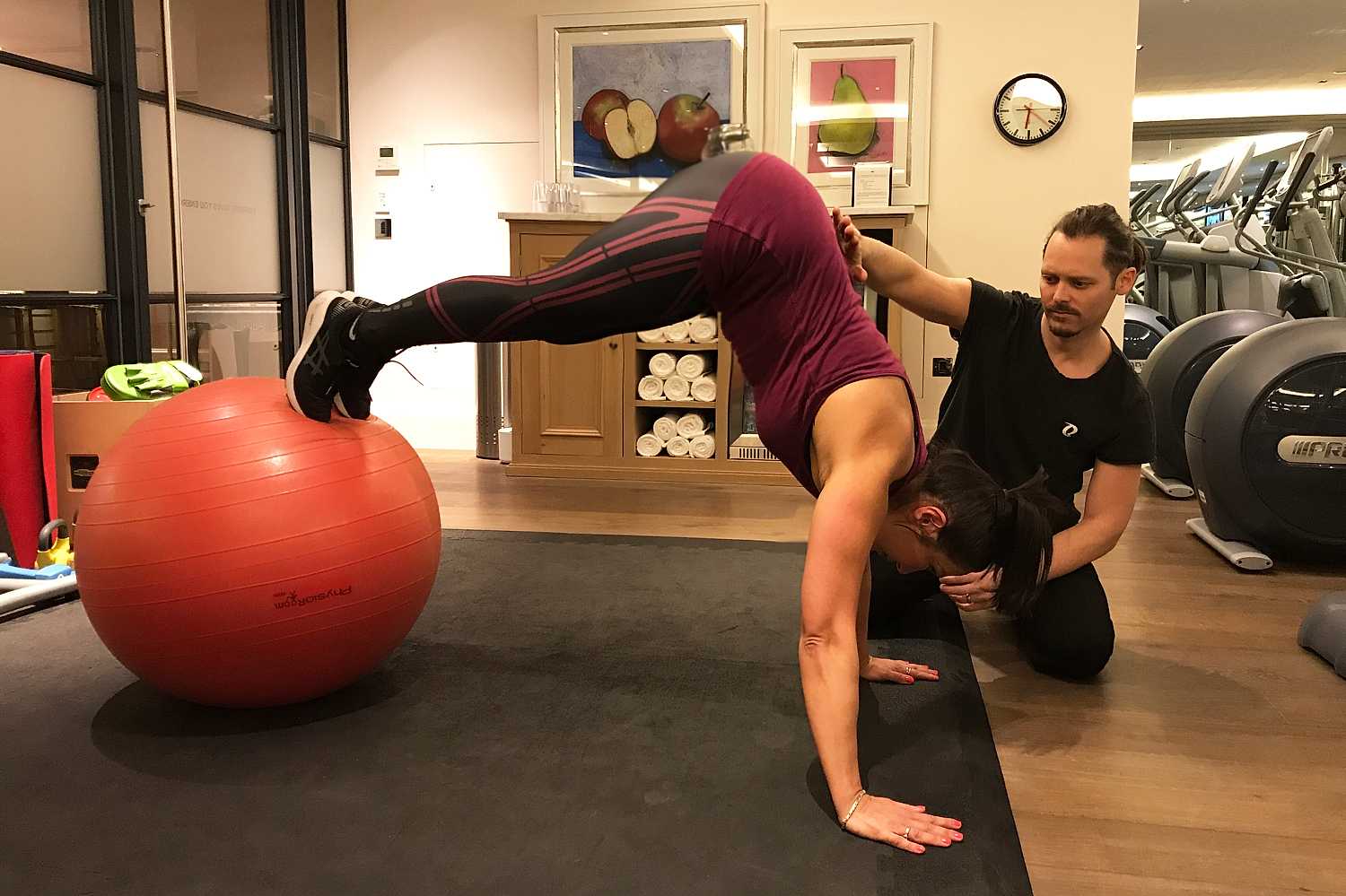 But surprisingly, it was the 10,000 daily steps I found hardest to fit in. Unlike the Methodology X workouts, I couldn’t do this in my living room, which meant I had to get me and the baby out the house. All moms will know this can be tougher than you’d think!

Sometimes it was great — Matt, Milo, and I would have a lovely evening stroll in a nearby park. But other days it was a bit of a hassle; one night I even found myself walking around the garden at 11 p.m. trying to get my steps in!

Tired and aching, there was a point when I wondered whether it was worth it. After all, I was never going to have the grace of Gisele Bundchen or allure of Alessandra Ambrosio, no matter how many planks I did. But four weeks in, the soreness began to lift and I felt full of energy. Better still, I’d lost almost 14 pounds and managed to fit into my pre-pregnancy clothes again. And my shape changed, too. My waist was visibly narrower — two inches to be exact — and my thighs were slimmer. Bingo!

How hard is it to eat like a Victoria’s Secret model?

Although I felt hungry for the first two weeks, Dan assured me this was because my body was detoxing itself of sugar, not because I wasn’t eating enough. As I could only have a tiny bit of alcohol once a week, going out was pretty much out of the question I turned down nights out with friends and saved trips to the movies and bars for Saturdays, which were my one cheat day.

When I went out for dinner, I had to be careful what I ordered. Club soda with lime, salads with no dressing, and chicken or fish with a slice of lemon instead of sauce were my usual orders. Most places were accommodating, and when they weren’t, I just opted for the healthiest meals available.

It was hard at times, especially when I had to watch Matt enjoy pizza or Indian takeout. On the rare occasions I reverted to my old eating habits and had some pasta or wine, which made me feel sluggish and drained the next day.

The Victoria’s Secret program does work. It’s easy to think that the Victoria’s Secret models are just naturally blessed with these perfect bodies, but this routine proves that even they have to work at it. But the thing is — that’s literally their job!

For an ordinary mom like me, it was sometimes tricky to find the extra hours in the day to fully commit to the program, but I’m happy I did. I definitely think the results were worth the effort. Do I think I’d be able to fully commit to the program for the rest of my life? No. But my six weeks has had a lasting impact — I’m much more careful about what I eat now, and as a result, I’ve stayed slimmer and feel much better about my appearance. 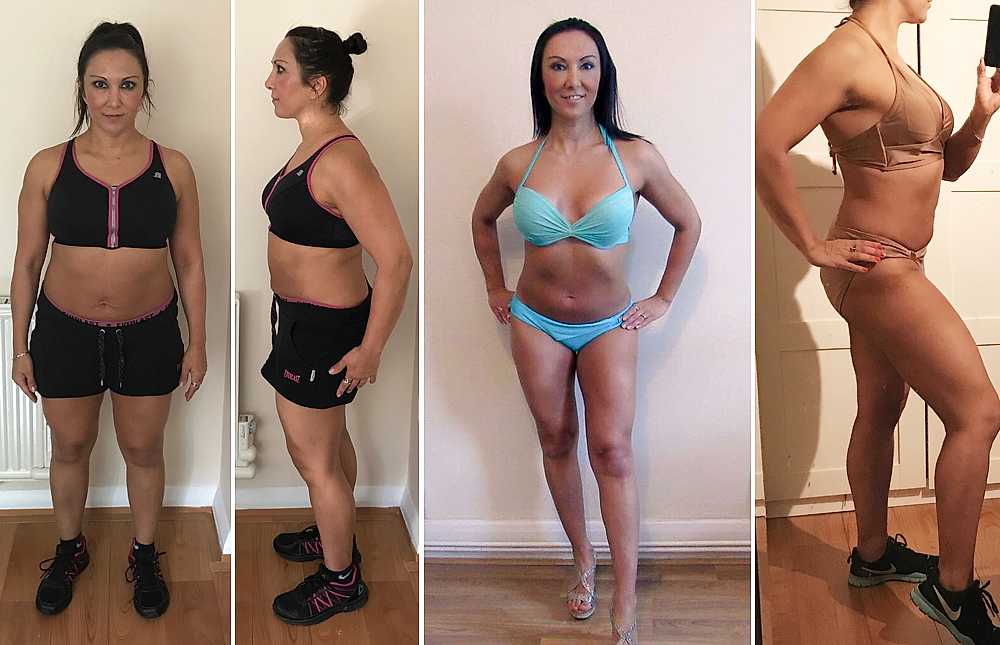 Before and after photos. (Photo Credit: Nilufer Atik)

And though I might not have ended up looking exactly like Candice Swanepoel, I was definitely one step closer to fitting into my own nice underwear again.

This post was written by Nilufer Atik. For more, check out our sister site Closer.

So What Exactly Is a Keto Diet? We’re Breaking Down the Basics

Hypothyroidism and Other Non-Diet Related Causes of Weight Gain