Oscar winning actress Kate Winslet isn’t shy about her thoughts on beauty. The Titanic star heralds “natural beauty” over and surgically enhanced looks and holds staunch anti-surgery views. She once told The Telegraph: “[Plastic surgery] goes against my morals, the way that my parents brought me up and what I consider to be natural beauty.”

So, it’s probably no surprise that the mom-of-three’s beauty regime is incredibly low-key (we’ll get to that in a moment), but what may surprise some, is Winslet has been known to do her own hair and make-up for red carpet events.

Speaking with British Vogue, Winslet divulged her favorite beauty products and her own tricks (which we will be committing to memory) before explaining that some days she just can’t be bothered with a glam squad hovering around her.

“There are some days when I just don’t like all the fuss and faff that can come with lots of people prodding and fiddling with your face and hair,” she said.

“It’s hard to explain, especially since sometimes it’s lovely to be glammed up like that. But I’m a pretty low-key, low-maintenance person, and I like to keep life as normal as I can around me. So doing my own makeup is reassuring in that regard. It sort of normalizes a red-carpet moment, which — let’s face it — is far from normal!”

When asked how she prepares for a big red event, Winslet explained that for her, flawless skin and glossy hair are results of good health.

“First off, I have to say right away that sleep and health play a big part in looking fresh… I do try and look after myself in the few days running up to that moment. Nothing fancy or expensive, but I’m 42 now, so I can’t get away with murder anymore! So my top tip would be water. Water, water, water. Keep the body hydrated and the skin will follow suit.” 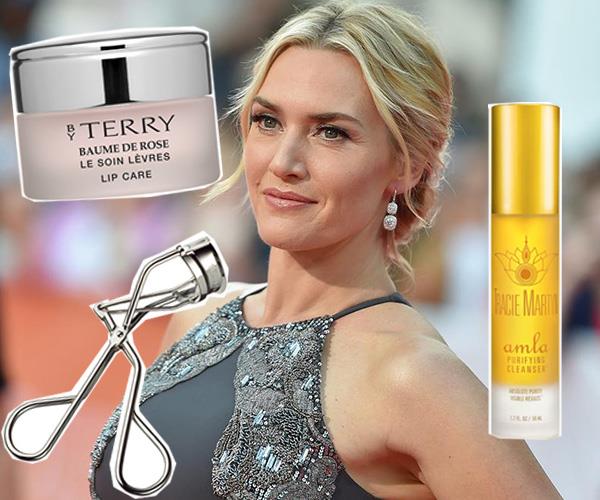 So when the actress is off-duty and applying her make-up herself, what is she wearing?

Winslet revealed to the publication that she has a very simple, easy to replicate foolproof regime. She begins with a thin layer of foundation, curls her lashes with celebrity favorite Shu Uemura curler, but passes up mascara in the daytime (“to preserve the dwindling lashes”), and lastly peps her pout with a touch of By Terry Baume de Rose balm.

As well as never toying around with Botox (“I am an actress, I don’t want to freeze the expression of my face”) another of Winslet’s beauty don’ts is going to bed wearing a face full of make-up. Her favorite formula is Tracie Martyn Amla Purifying Cleanser.

18 Celebs When They Were Adorable Toddlers