For many people diagnosed with cancer, the symptoms are obvious: bumps, lumps, and blood where it shouldn’t be are all warning signs that something could be wrong. But for Narell Whitehead, a chance encounter with a TV advertisement was the difference between life and death.

Narell, then 31, had been experiencing a range of subtle symptoms for a while — some bloating, frequent bathroom breaks, and a recurring urinary tract infection — which she put down to just being a woman and being tired. But the commercial — a 2009 advertisement of an ovarian cancer awareness campaign — changed her life.

“They ticked off all of these symptoms, and it said, ‘They’re very mild, but by the time 75 percent of women realize what the symptoms are, they’re too advanced.’ As they went through that list, I thought, ‘My god, I’ve got all of that.’ Not knowing ovarian cancer actually can’t be detected by a pap smear, I immediately went to get one, and my results were clear. Luckily, the doctor noticed that I had a bit of bleeding,” Narell says.

“After that, I had a core biopsy with the gynecologist, and that’s when it all came out. Yes, it was cancer. When my gynecologist told me over the phone, I just remember there was ringing in my ears. I couldn’t hear what he was saying. He said, ‘Yes, it’s cancer,’ and I just went blank.”

Even though doctors were able to get a rough diagnosis of the situation, they didn’t realize the extent of how far the disease had spread until Narell’s surgery.

“Their scans and ultrasounds didn’t pick up anything, they only found out what was going on when they opened me up to do the radical hysterectomy. That’s when they said both ovaries had tumors on them.” The extent of the cancer was severe. “They said it was on my ovaries, [and] it had spread down to my womb, down to the cervix, [and] it was in my lymphnodes… They said within six months I would have been dead.”

But every dark cloud does come with a silver lining. In the midst of her terrifying ordeal, and just weeks after having a radical hysterectomy that removed her uterus and ovaries, Narell stumbled into an unlikely love story. 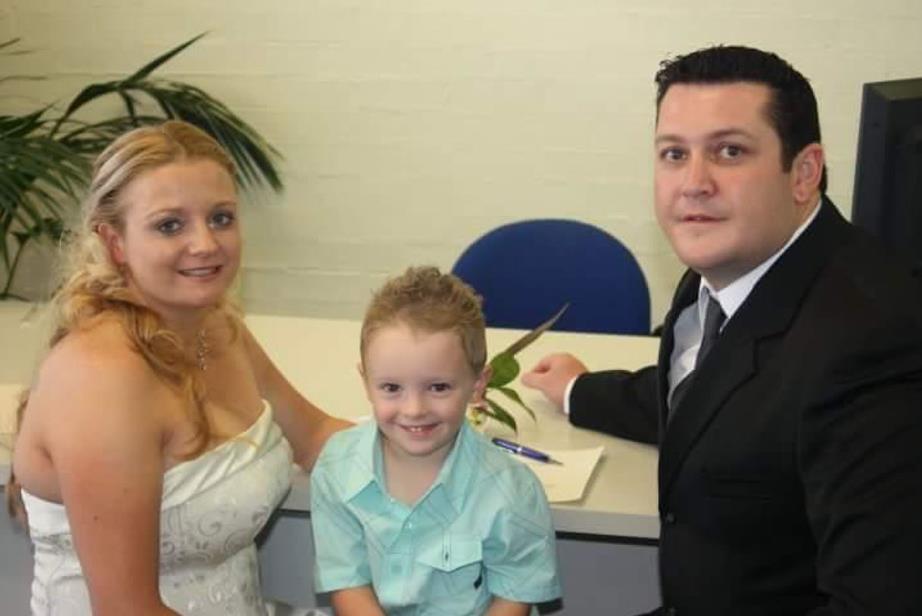 “I went in, I had the radical hysterectomy, and five weeks after that, I met my husband,” Narell says. “I wasn’t looking for anything — it just happened. They didn’t have a cancer center in Nowra, [Australia] so I had to travel to a Wollongong, [Australia] hospital, which is more than an hour each way, every single day for radiation. He had a house up there, and I stayed there when I wasn’t feeling well.”

“It was a big love story that I probably wouldn’t have gotten into, except I thought, ‘Well, you’re probably going to die, so let’s do the opposite of what you’ve always done and go on a date with this guy.’ And we got engaged a week after that! We went on a date on Friday night, and I went back on the Monday night and never left. It was the opposite of everything I’ve ever done.”

“We’ve been together almost nine years, and he also came along with a 2-year-old. I got the child I couldn’t have, and he was there to support me though post-surgery, chemotherapy, and radiotherapy.”

In the midst of her whirlwind romance, Narell also had to undergo chemotherapy and radiation.

“I had radiation and chemo for six weeks. Radiation was every morning… I’m the one in 10,000. Heaps of people go through this and have no issue, but I had a complication for everything. I was terribly sick throughout the whole process. What people don’t realize about radiation (and what I didn’t know) is that it damages your bowel and your stomach — it causes irreparable damage and scar tissue. I had a lot of issues with that and lost a lot of weight. And with the chemo, I was sick as sick could be.”

“The chemo wiped out my entire immune system, so I was calcium-deficient, iron-deficient, immune-deficient, and that led to a lot of sickness,” Narell says. “But I got through it. I was back to work right away, I had no choice.”

After finishing up her treatment, Narell got married, bought a beautiful farm out in the country, and went about her life. She kept up with her regular appointments and check-ups, and everything was smooth-sailing — until her five-year appointment, which is when things went south, once again.

“I went through all of that and thought, ‘I’m finally over all of this,’ and then, on my five-year appointment, I went back. I thought, ‘This is great, I’m going to get through this appointment and they are not going to see me again. I am out of here. I made it to five years.’ And then they found another growth.”

This was a horrifying, but statistically expected outcome — new research has found that 70 percent of ovarian cancer survivors will experience a recurrence of the disease at one point. On her scan, Narell’s doctors found that cancer cells from her now-removed ovaries had attached to her bowel wall.

“I thought ‘Surviving it once, yes… twice? I don’t know about that.’ The odds were against me. Even though I didn’t have any ovaries, some cells had survived along the way and had attached to my bowel wall, so it I had to have a full bowel resection.”

“I had complications from that, of course. One in three people will wake up [from bowel surgery] and they’ll have an ileostomy bag. I woke up and the doctor said, ‘Good news! I reattached your bowel, but you’ll have to have this ileostomy bag.’ I just about died. It was the worst thing you could say to a young woman. I had that terrible bag for four months.”

But along with being uncomfortable and awkward, Narell suffered severe pain while she had the ileostomy bag.

“[Because of] the constant pain, I couldn’t walk. It was a nightmare. It just puts a damper on everything. You don’t feel like a woman, you feel like there’s something wrong with you. I handled it because I had to handle it. There was no other way for me to do it, I just had to keep going, and kept putting one foot in front of the other.”

“Once I got through that — once again, I had massive complications: I couldn’t eat, couldn’t drink, I lost about 100 pounds — I still have ongoing issues, and I will forever.”

“I have ongoing blood tests, gynecological examinations, and I have a CT scan every year to check that there’s no more tumor growth. Every time I go in, you think, ‘Oh god, I hope they don’t find anything.’ You look at their faces to see if they’ve seen something. You’re constantly thinking, ‘What if they find something?’ Because my chances of survival for a third time are not going to be good. I was lucky to get through it twice.”

“It’s a constant worry. It’s in the back of your mind. It’s a really deadly cancer, and it doesn’t discriminate. I always thought, ‘I have no ovaries now, there’s no way I can get it back again.’ But you can.”

The loss of her fertility weighed heavily on Narell, too. Following her radical hysterectomy, Narell struggled with the thought that she’d never be able to carry children of her own.

“The main thing that affected me is not being able to have a baby. I struggled with that for a long time. Even after the hysterectomy-induced menopause, I still yearned for a baby,” Narell says.

“I hadn’t had any children [when I was first diagnosed]. I’d gone and done my career and started paying off the house. I missed that boat completely. I thought I was doing everything right, but I had missed the boat completely. That hit me hard. To have that decision taken out of your hands was a shock.”

“But I was more concerned about dying, and I thought ‘I gotta get through this. It’s going to take these things away from me but I’m going to get to live,'” Narell says. “I still have that urge and that desire to have a baby. I’m working on my step-son having six children and leaving a couple with me!” she jokes. 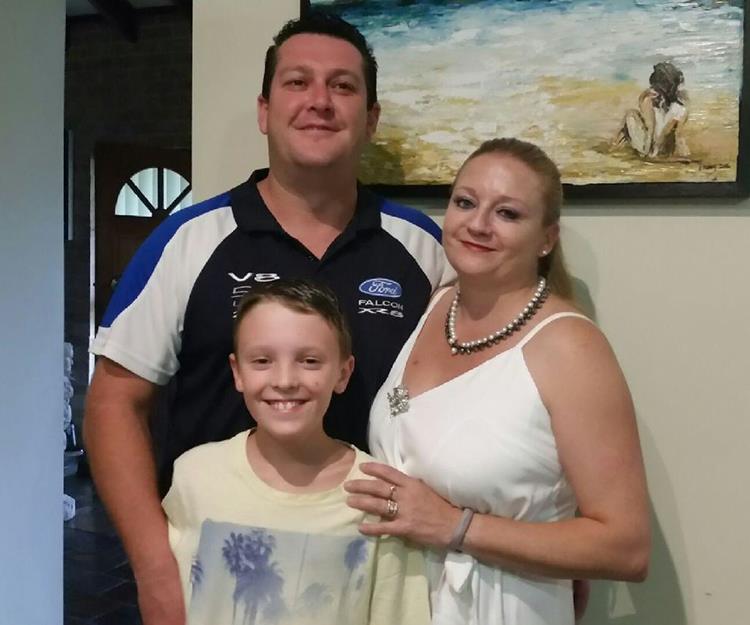 Moving forward, Narell is passionate about educating other women about ovarian cancer and helping ~educate~ women to better recognize the symptoms as a whole. “I had no idea what it was. I had no idea there was no test. I had no idea that it had the lowest survival rate. I learned everything by someone putting a TV ad out and listing off the symptoms.”

“People say, ‘Why is there so much awareness for breast cancer, but not for ovarian cancer?’ It’s because there’s not enough survivors alive to spread awareness. We don’t have a great rate of survival. That’s why.”

Diagnosis, Narell notes, can be tricky. Without a clear indication of what’s wrong, discovering the cancer before it’s too late is a dangerous business. And some of the signs are so subtle, women explain them anyway until it’s too late. “The ultrasounds don’t always work. The scans didn’t pick up the extent of my tumor. It’s still hit and miss. You just ignore the symptoms. You think it’s part of being a woman, so you just ignore them.”

“I just want to get the awareness out there, and to get women to stop and have a look. Do you have any of these symptoms? Talk about it with your friends. Speak to other women. If they’re saying they’ve got bloating or bleeding, tell them to have a look. Get a test, [and] pay attention to your body. If I can get one person to take a look and say ‘I’ve got these symptoms,’ then job done.”

Despite her string of bad luck, Narell has always looked on the bright side. “I say, ‘If I’m lucky enough to get all of this, [then] hey… maybe I’ll win five million [dollars] on the Power Ball!'”

This post was written by Mahalia Chang. For more, check out our sister site Now to Love.

Thin Is No Longer ‘In’, Study Suggests