Lynn Wyatt, a mom of two, is an Atlanta native and a breast-cancer-patient advocate and grant reviewer with Susan G. Komen Atlanta. At age 40, she was diagnosed with breast cancer. This is the inspiring story of her seven-year fight, which she has shared exclusively with FirstforWomen.com.

When I scheduled my first mammogram, I felt empowered — I even considered it a rite of passage. Even when I got a call asking me to come in for a follow-up, I wasn’t worried. I had no family history of cancer. But when I saw the image of a pebble-sized tumor in my breast, I got nervous. And when I heard the radiologist say, “I don’t like what I see,” I began to panic.

I sat in my car in the hospital parking garage and realized that my whole world had changed in a matter of two hours. Still, it took five days for the doctor to get back to me with a formal diagnosis. Five excruciating days. When I heard that I had breast cancer, I couldn’t even comprehend it. I was 40 years old. I’d just had my first mammogram. I’d never heard of anyone who was diagnosed with cancer after her first mammogram. Then I got livid. I hated the cancer and what I knew it would do to my life. I knew nothing would be the same again.

My children were so young. My son Andrew was four and my daughter Alex was two. At that age, it was hard for both of them to comprehend. We told them that I had a “boo-boo” in my body that the doctor had to remove. And we read a book called Momma and the Polka Dot Boo Boo. 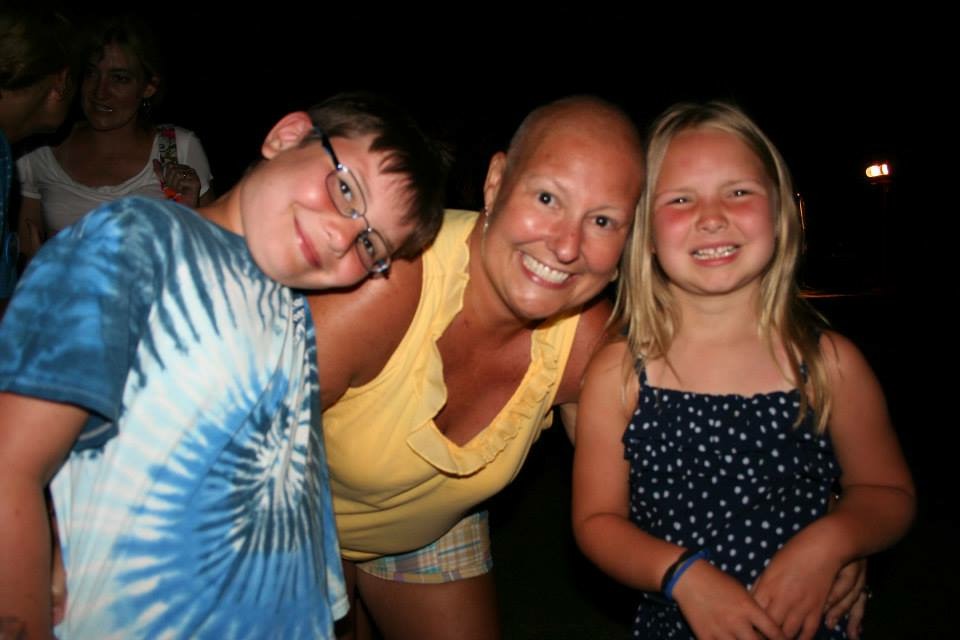 At first, it looked like I would get a lumpectomy, the operation that removes the tumor but saves your breast. However, after a subsequent MRI where my breast tissue literally lit up like highways at night because there were so many precancerous cells, I decided a double mastectomy would be best. Several thoughts ran through my mind: How would they build one breast to match the other that wasn’t operated upon? What were the chances that cancer would come back in my other breast?

The doctors didn’t advise me one way or another, even though they deal with breast cancer diagnoses every day and understand the consequences of a woman’s choices. Eventually, my husband and I learned to ask: “If it was you, what would you choose?”

When I found out that a reconstruction option known as TRAM would take fat from my abdomen to rebuild my breasts (essentially meaning I’d get a boob job and a tummy tuck), my decision was made! Turns out there was a bright side to cancer.

After the surgery, I had six rounds of chemotherapy. I lost my hair and I had horrible diarrhea. The chemo sent me to bed for days on end. But after my treatments were done, I did go on with my life. I played tennis and got involved in my kids’ schools. I began to count the anniversaries. One year cancer-free. Two years. Three.

Just when I thought I had cancer beat, I started having pains in my back and in the center of my chest. I brought up that painful spot on my chest a number of times to many different doctors — and was told multiple times it was scar tissue. But finally, I got a CT scan. At 5 p.m. my doctor called. When she asked if I was driving, I knew it wasn’t going to be good. I had stage four metastatic breast cancer — the cancer had found its way to my liver, my brain, and my spine, extending from my neck to my thigh bone. I was 44 years old. [Ed note: Although survival rates can vary, the five-year rate is just 22 percent for women with stage four breast cancer, according to the American Cancer Society.]

Andrew was eight then and Alex was six. The hardest day of my life was picking my son up from school after my husband and I met with my oncologist and hearing him ask: “Does the doctor know how to fix this?” As for me, I had to go through a process to get to acceptance. First, I withdrew. A few of my closest friends became my communications team. They answered questions from the rest of the world and organized dinners for my family. With a support team in place, I had some space to think about my new life.

So many nights I lay in bed feeling sad and crying over all of the things I’d miss experiencing, like my children’s high school graduations, parents’ weekend at their colleges, first jobs, weddings, and grandchildren. I tortured myself with thoughts about my husband falling in love with another woman after I was gone.

After that, though, I got very mad at this evil thing living in my body. I started to think of it as an enemy that I would fight at any cost. I started silently screaming at the cancer that it had chosen the wrong person this time.

When I got the second diagnosis, folks were in shock and many people asked how they could help. A friend’s mother worked for the breast cancer department at Emory University in Atlanta. She called Shannon Kahn, MD, a radiation oncologist at Emory Saint Joseph’s Hospital office who specializes in Gamma Knife radiosurgery. 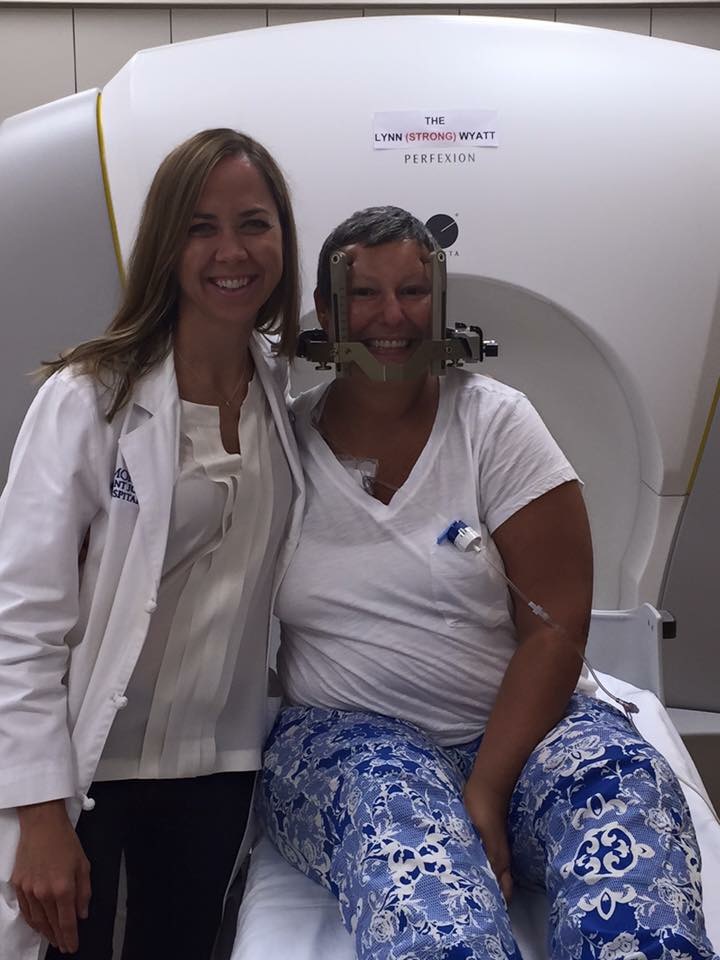 Despite its name, Gamma Knife isn’t really surgery — it’s a device that beams gamma rays to destroy tumors in the brain. I actually found the Gamma Knife procedure quite calming, even though you place your head inside what looks like an igloo. I had 21 brain tumors, but after six procedures, they were gone. I also had chemotherapy and radiation to treat the other tumors in my body. It took three years, but I was cancer-free again.

After I’d gone through the first treatment — the double mastectomy and the chemo — I learned how to leave the little things behind, that we are mortal, and that life is precious. (Having said that, I want to be very clear that my kids still got on my nerves and my husband was no closer to being perfect than he was prior to my diagnosis!)

But a terminal diagnosis is a whole new animal. Terminal. The word alone is heinous, so I never use it. I am “metastatic.” I have a chronic disease that, so far, medicine, brilliant doctors, and procedures like the Gamma Knife have kept me here and living a very normal life. 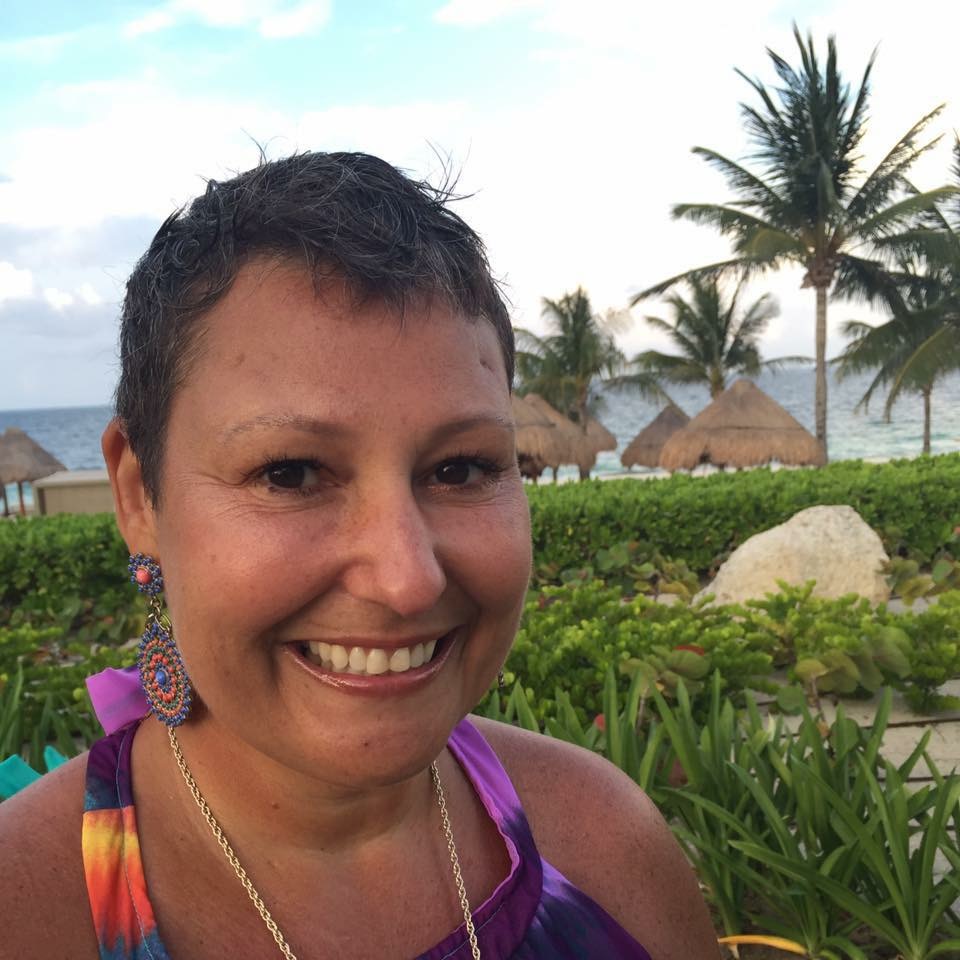 My advice for others is this: Listen to your body. Speak up if you don’t like the answers you are getting. Take a nap if you need to, but don’t give up. There are amazing technologies and medicines out there. Google those — don’t Google how long you’re expected to live.

At 47, I’ve learned that you either choose to give in or you choose to win. I don’t accept death as an option. I call it “plausible denial.” I define my destiny. I’m Lynn Wyatt. I’m a mom, a wife, and the lady behind you at the grocery store. I choose how I will live — no person or disease will ever do that for me.

9 Ways for Women to Combat Hair Loss Before Menopause Starts