It was a sunny afternoon in July when I got a craving for ice cream and some fresh air. I was 34 weeks pregnant. Because my daughter, Eva, was born premature, the doctors wanted to play it safe, so I needed lots of rest and couldn’t drive or walk far. I knew it was worth it for the health of my baby, but to be honest, I was going a little crazy.

My husband, Jamie, had been working from home, so he could look after me and Eva when she wasn’t at preschool. He wanted me to just stay at home and rest that day, but the idea of an ice cream was too tempting. “We’ll come straight home if I get tired,” I said. At about 2 p.m., Jamie helped me and Eva into the car and we set off for the cafe in the local park.

As soon as the engine started, I noticed a tightness around my bump, but I’d felt this on and off for a few days, so it didn’t alarm me. I closed my eyes and practiced my yoga breathing — slowing down the breaths and breathing through my nose to calm myself. “I feel really uncomfortable,” I admitted to Jamie. He said we should forget about the cafe and go to the hospital instead. I was defiant, though. Staying at home so much had been hard, and I was desperate for a treat. As we debated, my tightenings turned to sharp pain. The ice cream would have to wait, I agreed, as Jamie drove us to the hospital.

As I walked towards the maternity ward at the hospital, I had to keep stopping and breathing through the contractions. I was still convinced the midwives would send me home because I’d had false labor alarms throughout my pregnancy and been monitored then discharged. But this time, I was examined and told I was one to two centimeters dilated. “Your baby’s on its way,” a midwife said. “You must have been having contractions all week.”

Jamie was fantastic, bringing me water and cooling me down with a fan and a cold rag. It was a hot day and even in a summer maternity dress, I was too hot. By early evening, the contractions were thick and fast. Although I was still calm, I was struggling to talk. I was now three centimeters dilated and could be given the epidural I’d asked for in my birth plan. I wanted the labor to be as controlled and calm as possible. For me, that meant pain relief. At 7 p.m., I was moved to a delivery room. As I waited for the epidural, I closed my eyes and visualized my “safe place” — a beach with waves lapping the shore. I leaned forward as they gave me the epidural, and I focused on that blissful beach and relaxed.

I sat back as the anesthetic took effect: I was still able to wiggle my toes and I could feel my legs, but the pain melted away. I felt serene and positive. I lay back and slept for two whole hours. Once I’d woken up, I sat on the bed for a few hours chatting to Jamie, who was updating friends and family on the phone. At midnight, a midwife examined me; I was five centimeters dilated.

By 2:30 a.m., I was fully dilated and ready to start pushing. I felt a mixture of excitement and anxiety about the baby being born early. But I tried to reassure myself it would be OK. The midwives told me that the baby would get the best possible care, if needed. A doctor walked in, followed by two more midwives. Jamie held my hand, whispering encouraging words. I lay back on the bed and listened to the medics’ instructions. “It’s time to start pushing,” one said. I put all my effort into bearing down. It was hard work, and I could feel sensations of pressure, but the epidural meant I felt no pain.

I did exactly what the midwives told me to, pushing, then easing off when required. I loved being able to control what my body was doing. I felt 100-percent focused on getting my baby out. After half an hour, the baby’s head started to crown. I gave a massive push and the head came out, followed by the body in the next few big contractions. My baby girl was held in front of me, and I leaned across and gently kissed her lips. I felt such joy. At just over five pounds, Isla-Mai looked like a good size, but the midwives whisked her to an adjoining room.

After a few minutes, our baby was brought back to me, and I kissed her head and told her everything was going to be fine. She needed to be taken to the neonatal ward to be placed in an incubator to raise her oxygen levels. I urged Jamie to stay with her while I had stitches. A couple of hours later, once I’d rested, I visited Isla-Mai. Seeing her in the incubator and not being able to hold her was tough, but I took comfort from being able to express colostrum and help feed her a few drops. The midwives let me change her nappy through a hole in the incubator, and wash her face. It wasn’t the same as a cuddle, but being so close to her and knowing her lungs were developing hourly gave me so much encouragement. She went from strength to strength, and came out of the incubator after 24 hours. 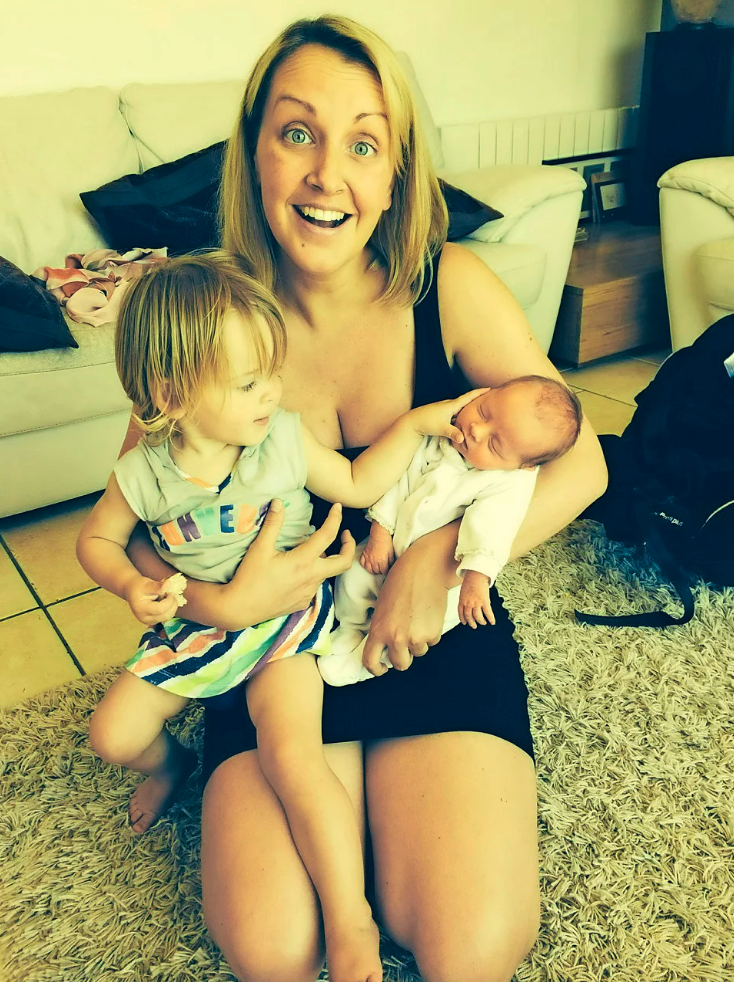 Holding her against my skin and breathing in her scent was unbelievable. We stayed in hospital for a week, and I treasured sitting for hours on end, enjoying skin-to-skin with Isla-Mai and persevering with breastfeeding until she latched on perfectly. It all made up for not being able to hold her for long at first. Looking at Isla-Mai now, you would never guess she was premature. She’s healthy and strong — we call her our little Viking princess. Her birth could have been stressful, but instead it was calm and positive. It was another month before we went to the cafe for that ice cream, but, boy, did it taste good!

This post was written by Olivia Siegl, as told to Mother & Baby. Siegl is mom to Eva (3) and Isla-Mai (22 months). She blogs at the-baby-bible.com. For more, check out our sister site, Mother & Baby.

I Gave Birth Twice in One Year