I watched as my two boys ran outside to play with their new puppy. A few minutes later, Harrison, who was six at the time, came back. “I was starting to cook like a sausage!” he complained as I got him some lotion.

Harrison had been perfectly healthy until a few months before his fourth birthday when he started losing weight. “My hands hurt,” he said, cracking his tiny knuckles. He cried constantly and stopped playing with his big brother, Miller. “Seems like a behavioral issue,” the doctor said. But he’d been such a bubbly, active toddler. I knew it was more.

Over the next few months, his body became inflamed. Harrison’s hands, feet, and even his eyeballs were swollen. The doctor sent him for scans and he was eventually diagnosed with Disabling pansclerotic morphea (DPM), a rare form of scleroderma, a chronic autoimmune disease causing tissue to thicken and harden. It also meant his immune system couldn’t fight off infections. He was the youngest in the country with it. “I’m afraid there’s no cure,” the doctor said, telling us we’d need to manage Harrison’s symptoms with steroid creams, bandages, and immunosuppressive drugs. 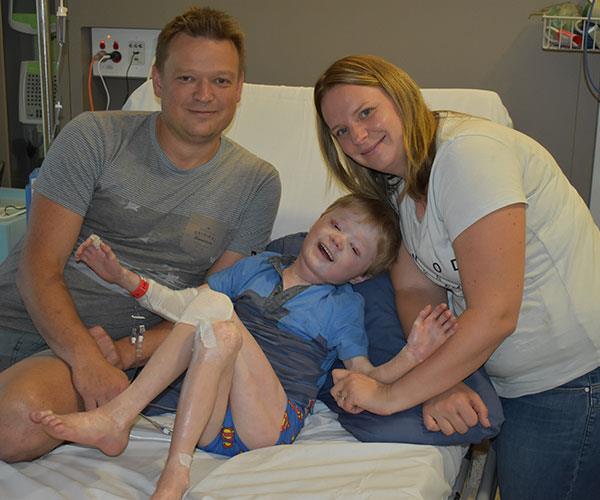 Those words rang in my head as I cradled Harrison. Researching at home, I read that the oldest living person with scleroderma was 36. It broke my heart to realize that my boy’s life could be cut short.

Since his diagnosis, we’ve been undergoing medical trials to stop his condition from getting worse. He can’t play sports because his skin is so tight that his hands split, and he can’t swim due to the risk of infection. If he’s out in the sun for too long, he literally starts to cook. Recently, we had to rush him to the hospital with a knee infection that could have been fatal.

Unfortunately, there’s no government funding for research into this disease here in Australia, so everything we’re doing is experimental. By sharing Harrison’s story, I hope to educate people about these rare, life threatening conditions. My boy, and others like him, deserve every chance for a cure.

This post was originally written by Lauren Irvine. For more, check out our sister site, Now to Love.

How I Finally Conquered Excess Sweating