When we dropped my daughter off at college across the country, I thought it was the beginning of her journey into independence. She’d worked hard in high school (maybe not as hard as she’d have us believe, but hard enough to earn her spot at an excellent college), she was moving far away from home (from California to Maryland), and she was about to begin her adult life. Of course, she wasn’t totally on her own. We were paying for her education, for her housing, and for pretty much all of her living expenses. But it was with the understanding that, when she graduated, she’d find a job and be on her own. That’s what children do — they grow up, they move out, and they start their own life. But now, at the age of 25, my adult daughter still lives at home.

We were excited for her when she graduated college a semester early. And when she found a full-time job right away that would have her putting down roots across the country, we knew we’d miss her but that it was an incredible opportunity. Eventually, we knew that she’d move back home — but I never expected her to move back into our house. And when she did, I assumed that it was only temporary, that after finding independence in college and in her own apartment for a year and a half, she wouldn’t want to go back to playing by her parents’ rules instead of living by her own. I figured it would only be maybe two or three months at most while she readjusted and found her own place — but a year and a half later, she’s still here.

On some level, I know why she hasn’t moved out yet. I think it’s easy for her to be here and to not have to deal with the difficult and adult decisions that come with living on your own, the sacrifices that you sometimes have to make to live the life you want to. By staying at home rent-free, she’s been saving money to put towards a down-payment on a condo or a townhouse. If she moved out, I don’t know how she’d afford to eventually buy her own place without saving almost every dime. But at the same time, I don’t understand.

Why Is She Still Living at Home?

She has a full-time job, so it’s not like she couldn’t move out if she wanted to. She lives in her tiny childhood bedroom, sleeping in a twin bed and sharing a bathroom with her mother. She doesn’t have her own living room, her own kitchen. She doesn’t get to decide what’s on the TV when she’s downstairs, or whether or not the TV is even on. She can’t have her friends over whenever she wants. And if she has a date, she certainly can’t bring him back here. There are plenty of financial benefits to staying at home — but do those really outweigh the benefits of living on your own?

When I left home at 17, I moved from Pennsylvania to Louisiana for college. And when I graduated, I stayed there for the summer before moving directly to California to start grad school. I loved my father more than life itself, but moving home wasn’t something you did. You’re supposed to go to school, get a good education, and then tackle your own life. From the time I finished undergrad, I did everything on my own. And I thought that my husband and I had raised our daughter the same way, given her all the tools that she needed to succeed, and the safety net to be there if, somehow, she failed. But it seems to me like she’s not even trying.

I wonder, sometimes, if this is what she wants — to be dependent on us, to be home with us, to be doing the easy thing instead of the hard thing that you can be proud of. She may have lived by herself in Maryland for a while, but I don’t think she’s learning how to be an independent adult and live her own life while she’s back in our house. And I don’t think we’re helping her by letting her stay here. It’s not that we don’t love having her at home. Her father definitely does — he loves to see her for the hour they’re both downstairs at the end of the day before they go up to their separate rooms for the rest of the night. I enjoy her company a lot, too, don’t get me wrong. Sometimes it’s nice to have her with us. She can be sweet and helpful. And I think sometimes I take for granted how much she helps. 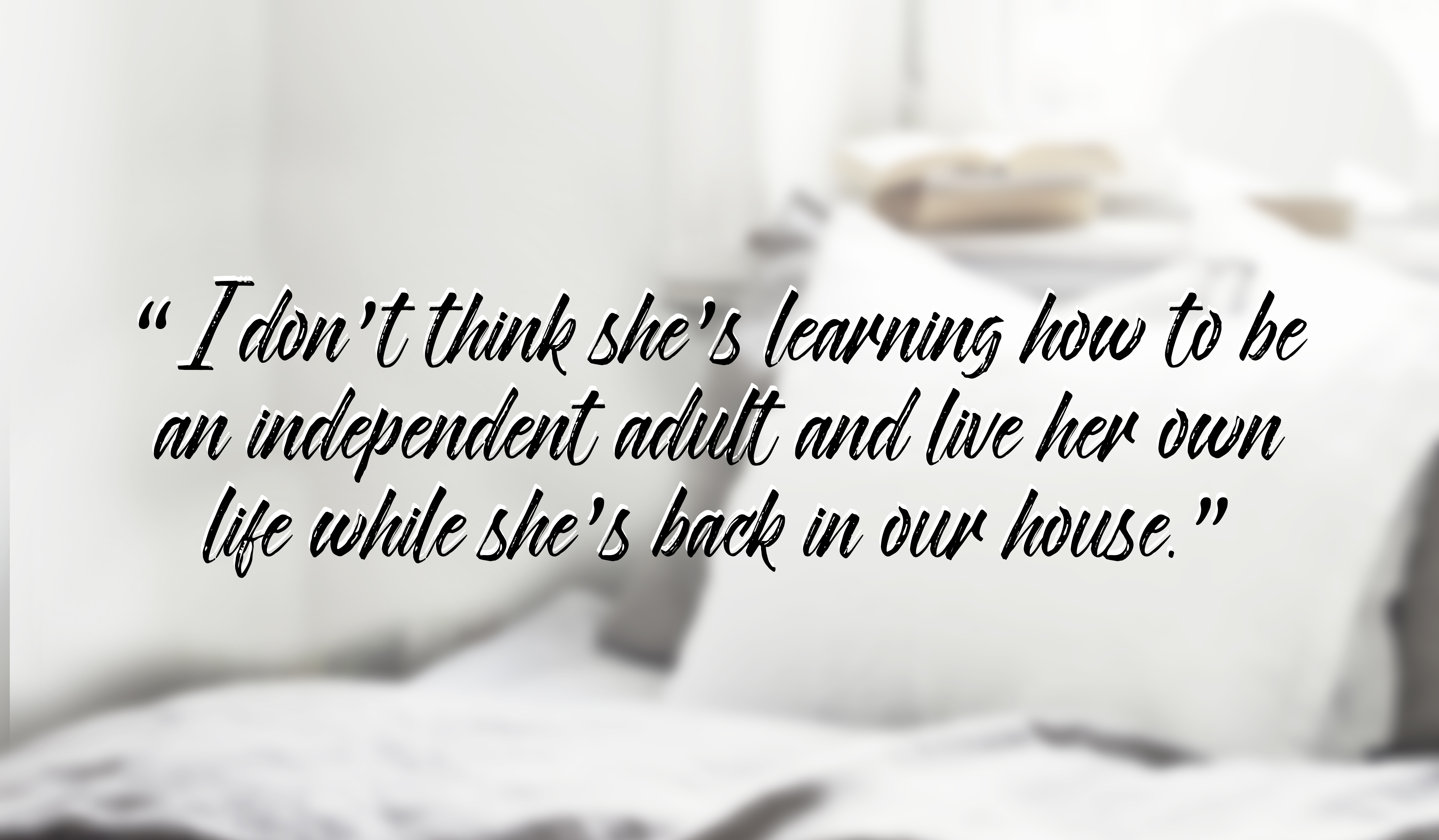 But other times, it’s frustrating. I value my privacy, and I have less of that with my daughter in the house. We have strong disagreements about politics, and it’s frustrating when she gets annoyed and argues with me in my own home. I don’t want to feel like I’m walking on eggshells when I’m watching the news at night. And it feels like I can’t complain within my own home without her trying to fix everything, leading to other arguments when I’m just trying to vent. I shouldn’t have to tell a 25 year old that her room is messy and that she needs to clean it. If she wants to have a messy bedroom in her own apartment, fine, but when she’s living under my room, when I’m helping support her, it comes across as not only disrespectful to her things, but disrespectful to us.

She’s my daughter, and I love her. I love spending time with her. But I think I’d love spending time with her more if we had a little less of it — less time to fight, less time to disagree, less time to get into it at the end of the day when we’re both tired or grumpy or frustrated. My older son moved out years ago, about a month after he came home from college, and now that he and his wife have a place of their own, I love to bring them groceries or fill their fridge up with food when I can. I would like to do that for my daughter, if she’d give me the chance.

I worry that I’ve raised a marshmallow. I know she’s smart and capable and knows how to problem-solve and take care of herself. I just don’t understand why she’s not ready to do that. I want her to live the kind of life where she can say, “I’ve earned this. I worked for this, and I’m financially independent. This is my life, and this is how I choose to live it.” While she’s with us, she doesn’t have that opportunity. She’s already halfway through her 20s — life isn’t going to get better than this. She deserves the opportunity to do what she wants and live how she wants, because these are the best years of her life. If and when she gets married and has kids, her life won’t be about her any longer — it’ll be about them until they’re grown and on their own. That’s what I thought I did. I did do that — but my daughter is still here. 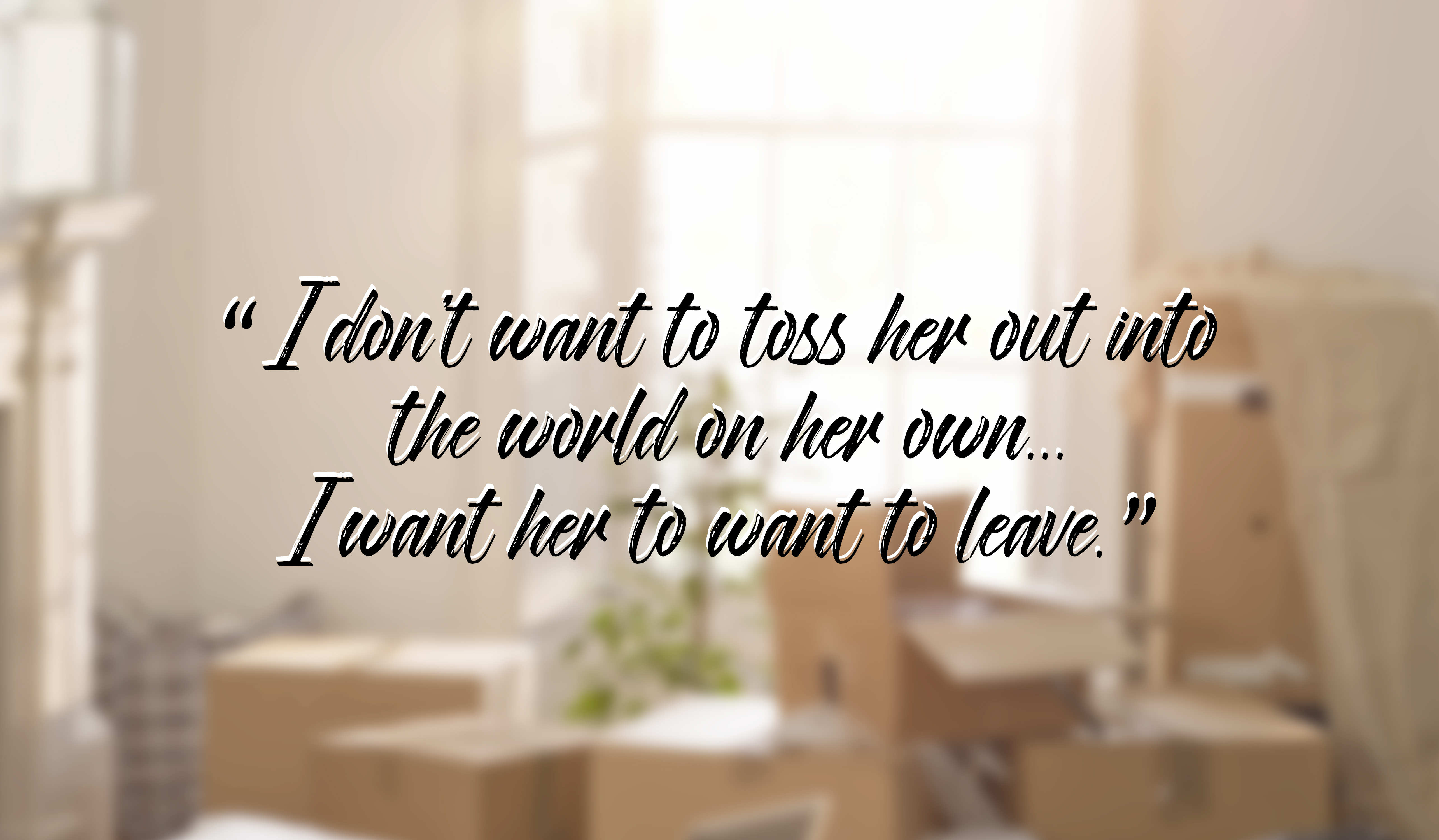 Much as I think we do her a disservice by letting her stay, I won’t be the one to push her out. My husband refuses to have the conversation where we encourage her to move out and be on her own. I’ve tried, but he and I have talked about it maybe five times or fewer. I get nowhere with him, which makes me feel even more unimportant in my own home, so I give up. But I don’t want to toss her out into the world on her own either way. I want her to want to leave — and yes, I want her to be smart about it, and I’m not going to like or approve of every decision she makes about where to live or what’s right for her, and I hope she listens to that. I hope she does her homework so that she makes careful, informed decisions. She’s a smart kid. But she’s not a kid anymore. It’s time for her to use her brain to figure it out, just like I did when I was growing up. It’s time for her to be not just an adult, but her own woman in the world.

This personal story was written as told to a staff writer by a 60-year-old mom and food blogger who realizes she has an adult child living at home and is just trying to discover the rest of her life.