Prince Harry and Meghan Markle took a trip to Scotland on Tuesday, February 13, which marked their first official visit to the region as a couple. As they arrived at Edinburgh Castle, the couple made the effort to stop and chat with members of the public and a number of flag-waving fans who waited for them on the esplanade outside the iconic location.

At one point, Meghan, who opted for a (very appropriate) Burberry tartan coat and pants by Veronica Beard for the day’s festivities, was asked about her upcoming bachelorette party. Although she’s unsure of the exact plans her friends have set in place, it “is sorted,” she told the crowd.

“We asked them what they were doing for their [bachelor] and [bachelorette parties],” Tom Martin, 30, told People. “Meghan said, ‘I’m not sure. It’s sorted, but it will be fun.'” As for her husband-to-be,” Harry said he didn’t know. I’m sure William’s got something up his sleeve,” Martin said. 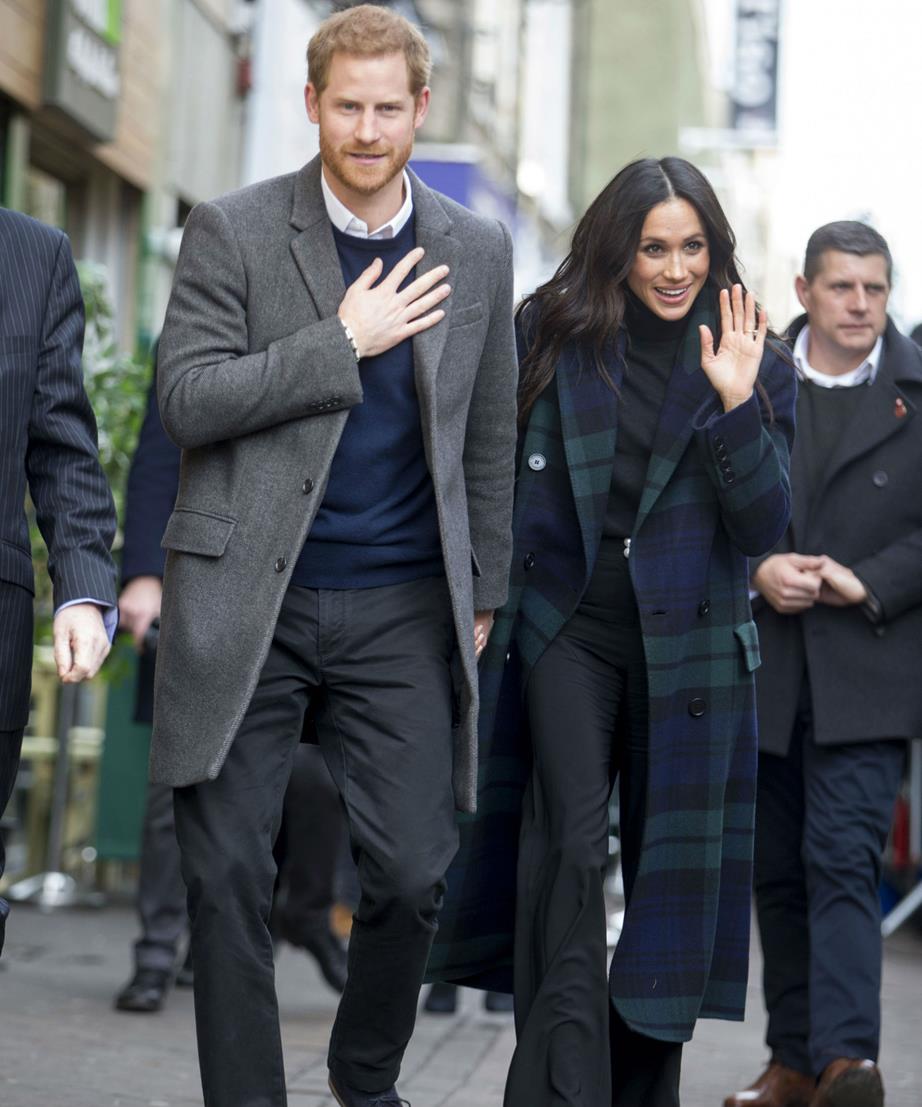 Prince Harry and Meghan Markle took a trip to Scotland on Tuesday — their first official visit to the region as a couple. (Photo Credit: Now to Love) 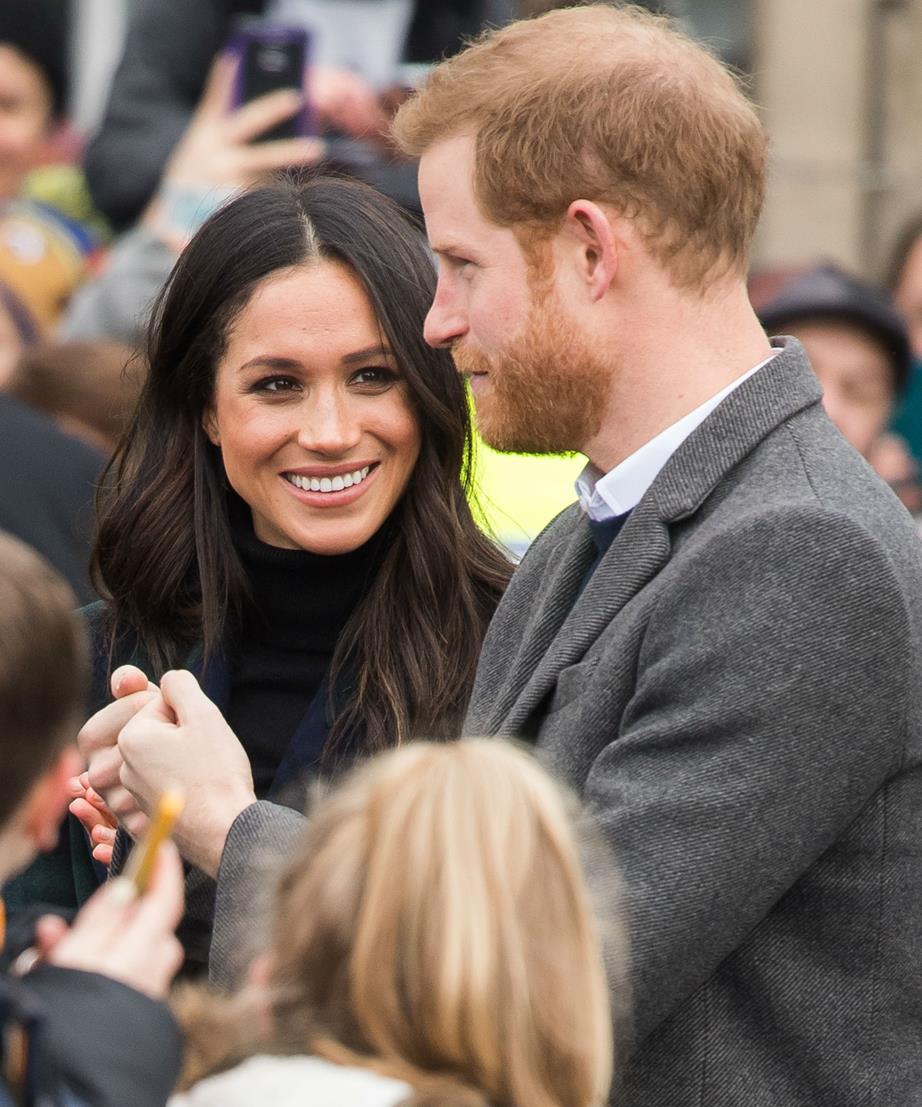 The look of love. (Photo Credit: Now to Love)

Harry, 33, and Meghan, 36, also met with a tiny horse on their visit to the capital — an adorable Shetland pony named Cruachan, who is the mascot of the Royal Regiment of Scotland. As seen in a video shared by Kensington Palace, Cruachan, who was perhaps overwhelmed by meeting royalty, tried to bite Harry’s hand. Luckily, he managed to pull his hand away just in time, before playfully reprimanding the pony.

Prince Harry and Ms. Markle are greeted on arrival at Edinburgh Castle by the Band of the Royal Marines and the mascot of The Royal Regiment of Scotland, Shetland pony Cruachan🐴 pic.twitter.com/3nzR9W6ZP5

The couple, who only have three months to go before their royal wedding, laughed off the encounter. The duo then learned more about organizations that work in locally and nationally in Scotland to celebrate youth in the Scottish Year of Young People 2018. Their visit comes after it was revealed that Meghan has been quietly visiting Grenfell Tower fire victims and other charitable organizations in an effort to get to know the charity sector. 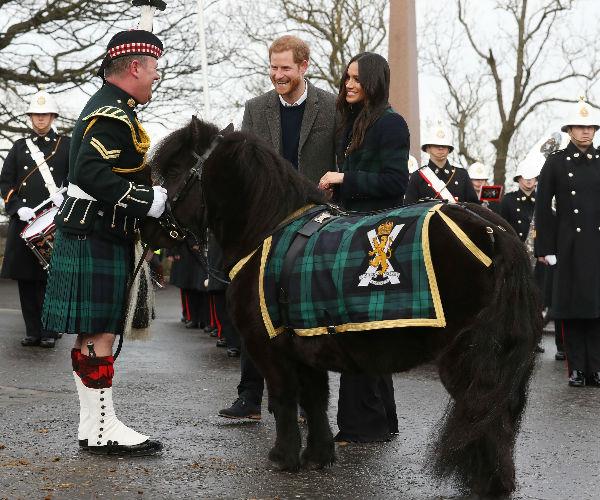 Upon arrival, the couple was greeted by the Band of Royal Marines and their mascot, an adorable Shetland pony named Cruachan. (Photo Credit: Now to Love) 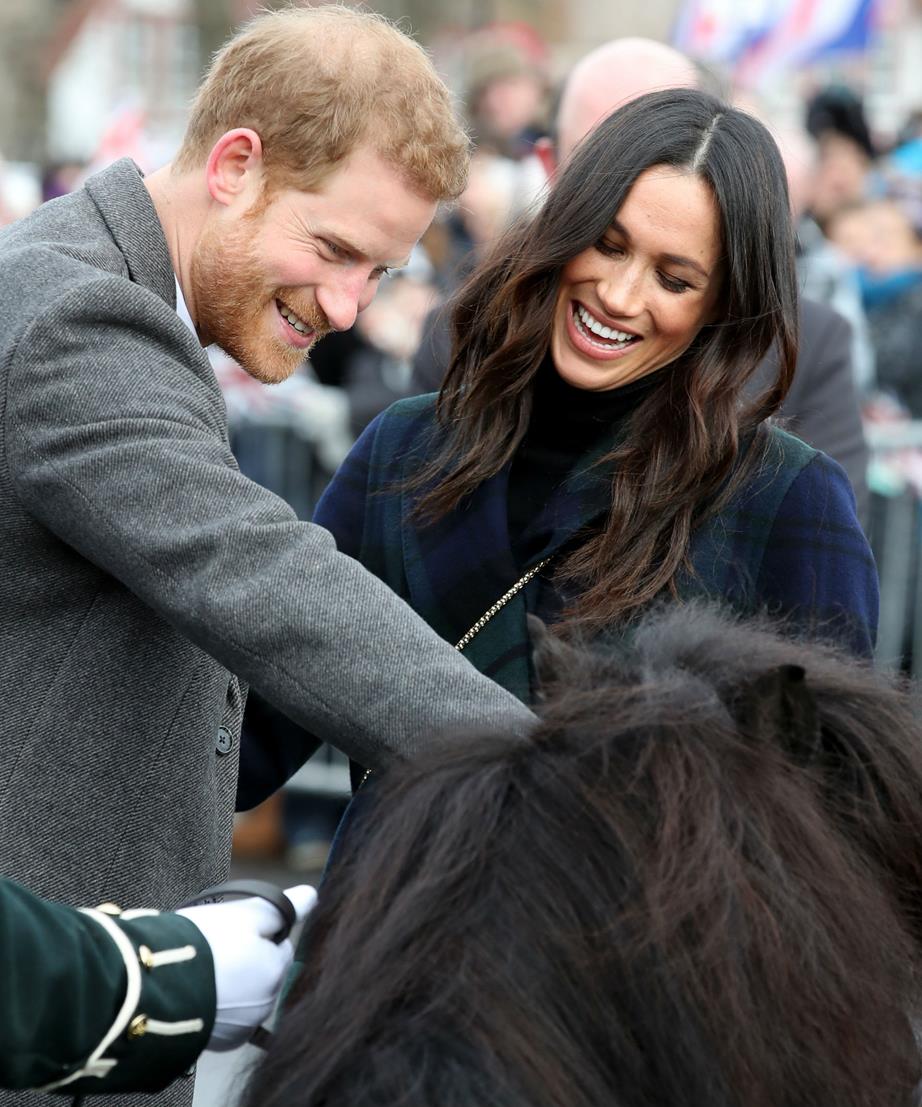 And the pony tried to bite Prince Harry. (Photo Credit: Now to Love)

Megan has been praised by those who were affected by the fire, which killed 71 people. “It means so much. She has a special place in our hearts,” one victim told _ The Mirror._ During one of her visits, Meghan reportedly went to the Al Manaar community mosque, which is near the remains of Grenfell Tower in West London. She made the visit on her own but was guarded by a royal protection officer and one of the prince’s aides. The visits reminds royal enthusiasts of the late Princess Diana, who also made secret trips to speak with the homeless and visit them in shelters at night when she lived at Kensington Palace.

Harry and Meghan will tie the knot on Saturday, May 19, at Windsor Castle. As Kensington Palace recently announced, after the ceremony, the newlyweds will have a tour of the town as their first trip as man and wife to greet fans from all over the world who have come to see them. It will remind people of Prince William and Kate Middleton’s wedding in 2011.

Following the carriage procession, guests will gather inside St. George’s Hall for a daytime reception. In the evening, Harry and Meghan will talk with their guests at a private reception hosted by the groom’s father, Prince Charles. Sources who spoke to the Daily Mail say the royal wedding will be divided into two segments: an informal dinner for 350 and a reception with drinks. Although there’s no word yet on the guest list, the palace promised they’ll share more details closer to the wedding date.