The countdown to Prince Harry and Meghan Markle‘s wedding has begun! On May 19, the couple, who announced their engagement last November, will tie the knot at St. George’s Chapel at Windsor Castle in what’s sure to be a breathtaking event. Though the pair have shared plenty of details surrounding their big day — like their invitations — the Suits actress hasn’t revealed much when it comes to her hair, makeup, and gown.

Meghan tends to style her hair smooth and straight or in picture-perfect loose waves, but her dark locks have also stirred up controversy, as she broke royal protocol more than once by wearing a messy bun at official events. However, author and royal expert Ingrid Seward says that Queen Elizabeth has become more approving of casual looks. “It’s her age,” Seward stated. “She is easier-going. It’s refreshing that [the royal family] is prepared to bend a bit.” 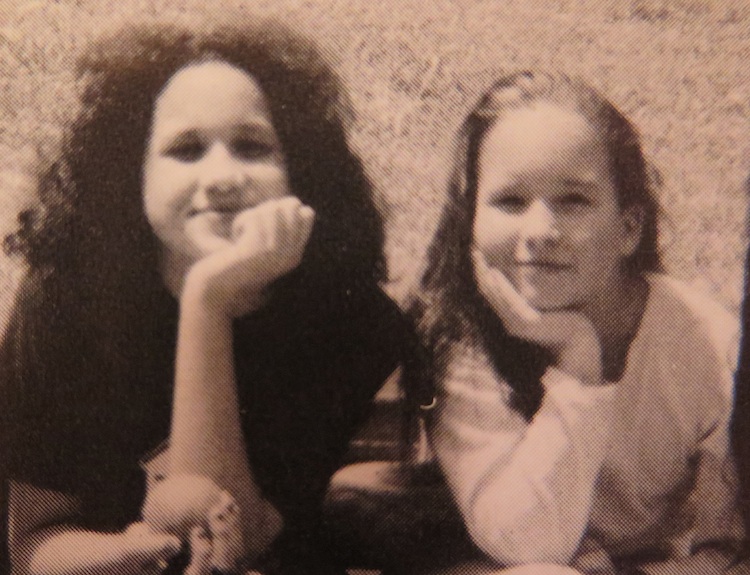 Meghan (left) with a friend during her childhood. (Photo Credit: Splash)

Despite her many outings, there’s still one look Meghan has yet to reveal to the public: her natural ‘do! Lucky for us, there are a few photos floating around that show the royal-to-be during her school days where she was rocking major curls! “OMG I love, love, love, her curls,” one fan responded, with another gushing, “She’s gorgeous either way — straight or curly.”

As for her dress, Look magazine reported that $560,000 has been spent on fashion and beauty so far for the wedding, with the majority of that covering Meghan’s attire. “Meghan is like any other bride preparing for her dream day,” a source told the magazine. “The wedding dress has been the biggest expense, and the budget has now doubled from what it originally was.”

In 2016, Meghan discussed her ideal look with Glamour. “I have the luxury of wearing beautiful pieces of clothing every day for work, so my personal style — wedding or not — is very pared down and relaxed. Classic and simple is the name of the game, perhaps with a modern twist,” she shared. “I personally prefer wedding dresses that are whimsical or subtly romantic. Delphine Manivet and Christos Costarellos are [favorites] of mine for their uniqueness and beauty. And I will always be a fan of Ellie Saab. J. Mendel is spectacular as well, especially for more structural designs.” No matter what she chooses, one thing’s for sure: All eyes will be on the stunning bride as she floats down the aisle!