In the second season of Friends, fans of the late 90s TV show were introduced to Russ, the hilarious doppelgänger of Ross Geller. Despite it being 13 years since the series ended, some hardcore Friends fans are still left wondering: Did David Schwimmer actually play Russ or was he portrayed by a really good lookalike actor?

Many people — even the most avid fans of the series — are confused as to whether or not David played the role in the episode titled “The One With Russ.” The character of Russ is actually credited to a person named “Snaro,” which has caused a lot of confusion among fans. Is Snaro an actor or was it really Schwimmer? 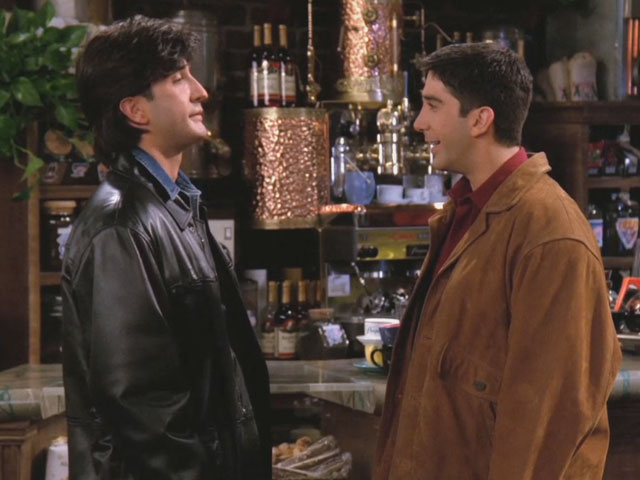 MUST-SEE: 12 Most Surprising Reveals from the ‘Friends’ Reunion

While Ross is busy obsessing over what a complete jerk Russ is, Rachel slowly starts to see the similarities between her two beaus. Because of this, she ends up dumping Russ. Russ is initially heartbroken and stops by Central Perk to lament to the Friends gang about getting dumped and subsequently runs into Ross’ ex-girlfriend Julie. The two immediately seem to fall for each other and leave the café together.

So let’s get back to David, who really did play both Russ and Ross on the episode. If it was really the A-list actor, then why is the role credited to Snaro? David allegedly used the pseudonym as a clever way to keep viewers guessing about the identity of the actor. With a little makeup and prosthetics, David has totally fooled fans — for years! David’s not the only one to play two characters on Friends — Lisa played her character Phoebe and her “evil” twin sister Ursula. So cool!

This story originated on Closer Weekly.

Jennifer Aniston and Matthew Perry Get Real About a Possible ‘Friends’ Reunion — See What They Said!

Matthew Perry Admits to Once Axing One of Chandler’s ‘Friends’ Storylines — Find out Why!