When he was only 12 years old, Prince Harry’s beloved mother, Diana, Princess of Wales, was tragically killed in a car crash in Paris on August 31, 1997. She was just 36.

Twenty years later, Harry, now 32, has opened up about the heartbreak he experienced on the day of her highly publicized funeral.

In an interview with Newsweek magazine, the much-loved royal recalled the moment he was forced to walk behind his late mother’s coffin alongside his older brother, Prince William; his father, Prince Charles; his grandfather, Prince Philip; and his uncle, Earl Spencer, in a funeral procession through the streets.

“My mother had just died, and I had to walk a long way behind her coffin, surrounded by thousands of people watching me while millions more did on television,” he told the publication. “I don’t think any child should be asked to do that, under any circumstances. I don’t think it would happen today.” 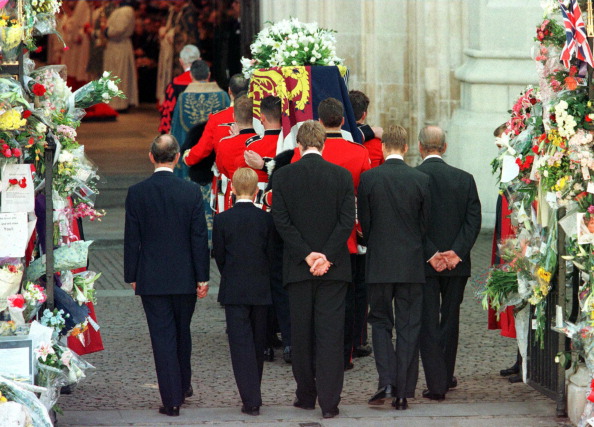 Check out highlights from the interview where Harry admits to having panic attacks.

Speaking to his rebellious phase, the royal explained he that now hopes to use his profile for good.

“My mother died when I was very young. I didn’t want to be in the position I was in, but I eventually pulled my head out of the sand, started listening to people, and decided to use my role for good,” he said. “I sometimes still feel I am living in a goldfish bowl, but I now manage it better. I still have a naughty streak too, which I enjoy and is how I relate to those individuals who have got themselves into trouble.”

MUST-SEE: Prince Charles’ Response to Harry’s Birth Explains Why Diana Was So Protective

In the same interview, the fifth in line to the throne said he tries to maintain an ordinary life—something which his mother strived to provide—amongst his extraordinary duties.

“My mother took a huge part in showing me an ordinary life, including taking me and my brother to see homeless people. Thank goodness I’m not completely cut off from reality,” he said. “People would be amazed by the ordinary life William and I live.”

“I do my own shopping,” he continued. “Sometimes, when I come away from the meat counter in my local supermarket, I worry someone will snap me with their phone. But I am determined to have a relatively normal life, and if I am lucky enough to have children, they can have one too…Even if I was king, I would do my own shopping.”

The royal also recently got brutally honest about suffering from panic attacks after Princess Diana’s death. Speaking candidly in a new documentary called Prince Harry: My Journey for U.K.’s Forces TV, the 32-year-old shared: “When you can get your own head and self back on the right path, the amount of people you can help is unbelievable, because you can tell the signs in people. You can see it in their eyes. You can see it in them—their reactions,” Harry said.

MUST-SEE: Meghan Markle Had a Very Telling Non-Answer When Asked About Prince Harry

Thankfully, Harry said seeking help has left him in a good place: “You help yourself, so you can help others. And I think that is hugely powerful.”

This post was written by Candice Mehta-Culjak. For more, check out our sister site Now To Love.