The fashion of Kate Middleton can be boiled down to three words: classy, elegant, effortless. In fact, it reminds us of Princess Diana‘s style, which was legendary. As common women who married into royalty, Diana and Kate share so many qualities, be it their status as loving, down-to-earth moms, their time spent in the spotlight with the cameras always snapping, and their overall beloved status with millions of fans. But it’s Kate and Diana’s memorable fashion sense that just may be their biggest shared trait.

See what we mean in these photos. Kate Middleton blew us away with her subtle way of honoring her late mother-in-law whenever she gets the chance through what she’s wearing. For instance, who remembers when Princess Diana broke out her signature plaid Catherine Walker coat for her trips to Japan, Scotland, and an English children’s hospice? The duchess Kate Middleton similarly chose a plaid coat to visit a children’s hospice in October 2016, and photographers had a field day. It seems that everyone knew Kate’s outfit was paying homage to her husband Prince William’s dear mom, and it truly warmed our hearts.

Such a fan of the late princess’ style, Kate even mirrors some of Diana’s most casual looks. Both women have been known to wear the comfy Superega sneakers when the occasion arises: for Kate, while supporting the London Marathon in 2017 and for Diana, while doing charity work in Africa in 1997. And if you’re looking to get on board with this trend, too, it’s totally doable — the practical duds only cost $65! 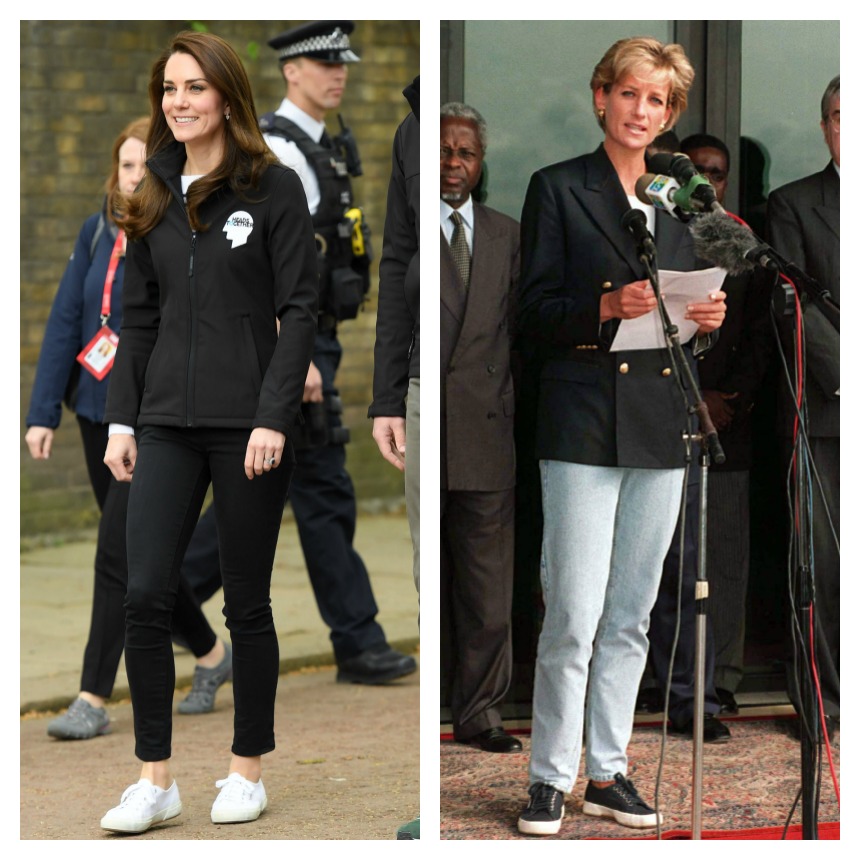 Let’s face it: It’s no easy feat to emulate Diana’s legendary sense of style. But it seems that even though she is as much of a fashionista as Diana was in her day, Kate sees the value in taking a trip to the past when she plans her outfits for important royal gatherings and official visits. She loves copying Diana’s iconic looks, and we love her for it!

Click through the gallery to see the best examples of this sweet royal tradition.