If you’ve spent anytime scrolling through Facebook, chances are you’ve seen a friend post a photo of what looks like a deliciously creamy, four-cheese garlic spaghetti dinner. Maybe your stomach involuntarily growled as you thought about how much you love the not-so-good-for-you carbohydrate. Upon further examination, you realize those noodles are not quite noodles. So what exactly are you looking at? Say hello to spaghetti squash—the trendy new vegetarian-friendly dinner option that’s wiggled its way onto kitchen tables everywhere. Here’s a crash course on the nutrient-rich vegetable.

MUST-SEE: Zoodles Recipes So Delicious, They’ll Have You in a Spiral

What is spaghetti squash?

Spaghetti squash is a golden-yellow squash with a mild, nutty taste. These squashes are typically two to five pounds and are available all year, even though their season runs from early fall to winter. The more yellow a squash, the more ripe it is, and the better it is to eat. When the fruit is cooked, the flesh becomes stringy, resembling spaghetti, hence the name.

A raw spaghetti squash will be firm. 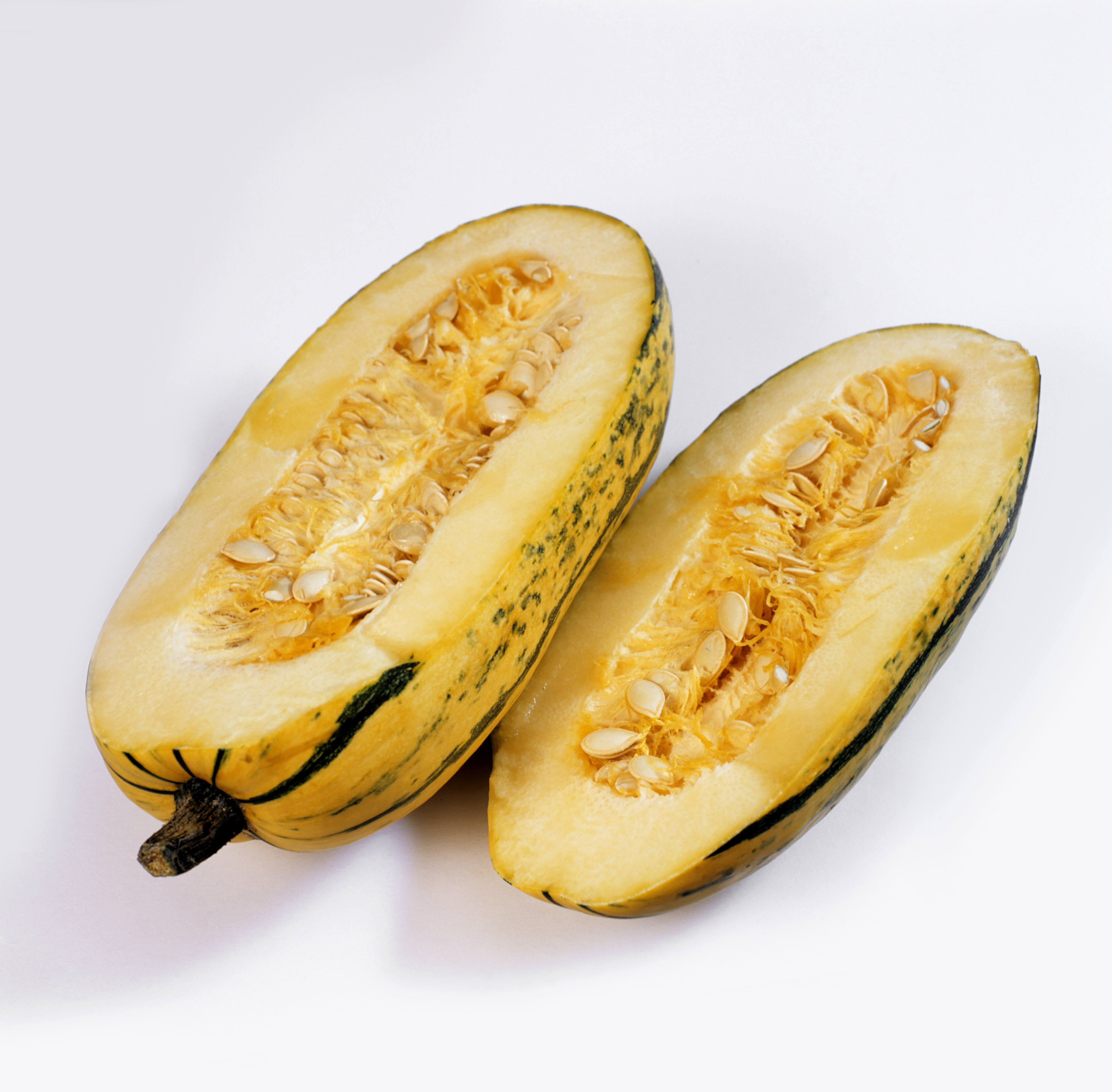 But once the squash is baked, you should be able to pull the flesh from the rind in rope-like strands. 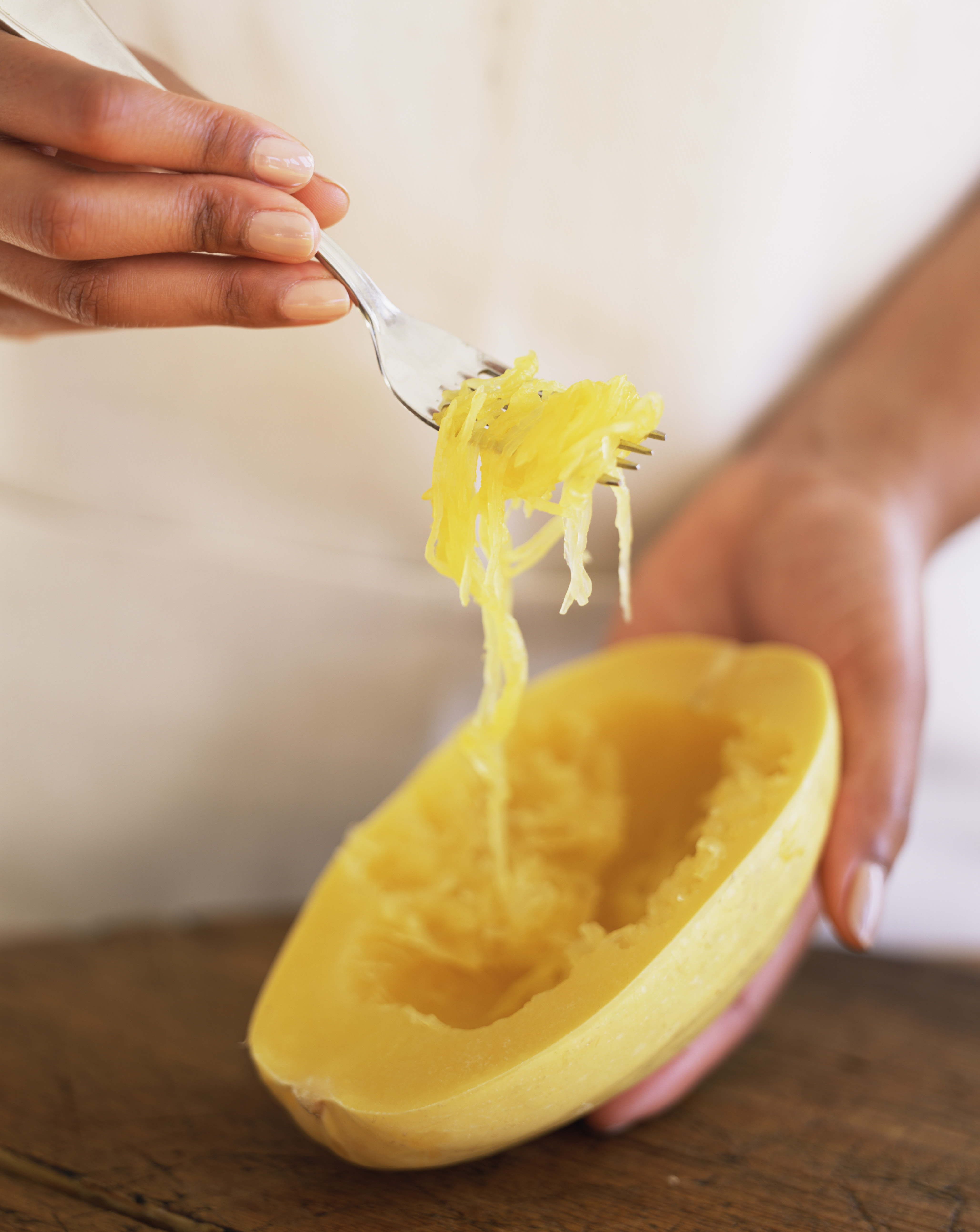 Check out your local grocery store’s produce section for spaghetti squashes. If you find that your store doesn’t carry them, try stopping by a farmer’s market.

One thing to note about spaghetti squash is eaters generally agree that it tastes like, well, squash. Internet users have described the taste as similar to yellow winter squash, a bit sweet, and slightly crunchy, among other things.

If you’re disappointed that spaghetti squash doesn’t have the taste or texture of normal pasta, don’t despair. Just like good, old-fashioned flour noodles, the real flavors come from the sauce and toppings you add rather than from the pasta or squash itself. And this is where you can really get creative in the kitchen.

MUST-SEE: 12 Chia Pudding Recipes That Do the Seeds Justice

What are some spaghetti squash recipes?

This is totally up to you. Pick up your favorite pasta sauce from the grocery store to throw on your “noodles” after roasting. You can add protein like shrimp, meatballs, or sausage—or all three! Maybe you’re trying to eat healthier? Spinach, mushrooms, avocado, and tomatoes are all delicious topping options.

How to cook spaghetti squash

Drooling yet? We are! So here’s how you can make a spaghetti squash dinner at home.

And to get back to those spaghetti squash seeds, all you need to do is give them a good rinse, coat them in oil and roast them in the oven. Sprinkle them with some salt or other seasoning and you have a simple, healthy snack.

What nutrients are in your spaghetti squash?

One cup of cooked spaghetti squash has about 42 calories, 10 grams of carbohydrates, and about 2 grams of fiber. In addition, spaghetti squash is loaded with key vitamins like vitamin A; which affects vision, plays a role in bone growth, and supports a healthy immune system; vitamin C, which can give you soft, radiant skin; vitamin B6, which affects metabolism; and potassium. Wow!

So who’s ready to fire up those ovens?

What Are Acai Bowls? Get the Scoop on the Healthy, Delicious Breakfast

What Is Chia Pudding? Say Hello to the Tasty, Healthy Trend

NEXT: What Is Nice Cream? Get the Scoop on the Healthy Ice Cream Trend