The doctor frowned at the monitor then left the room in silence. My heart started racing, and I thought something had to be really wrong. I was just 22 weeks pregnant with my first baby — a little girl — and I’d been rushed to Canberra Hospital in Garran, Australia, after going into early labor. I was desperate to delay the birth.

The baby’s dad, my boyfriend Dan, was going to come to the hospital when he could, but for the time I was alone and terrified. Having been diagnosed with endometriosis, I knew how lucky I was that I had conceived in the first place, but now my little girl was trying to arrive far too soon. I wondered if there was something else wrong, too.

Finally, the doctor returned with three more people and they talked in hushed tones as they examined the screen. Then, one turned to me. “Your baby has a tumor the size of an orange at the base of her tailbone,” she explained. “We won’t know whether it’s cancerous until she’s born.” The tumor was extremely rare and they didn’t know why it had formed. 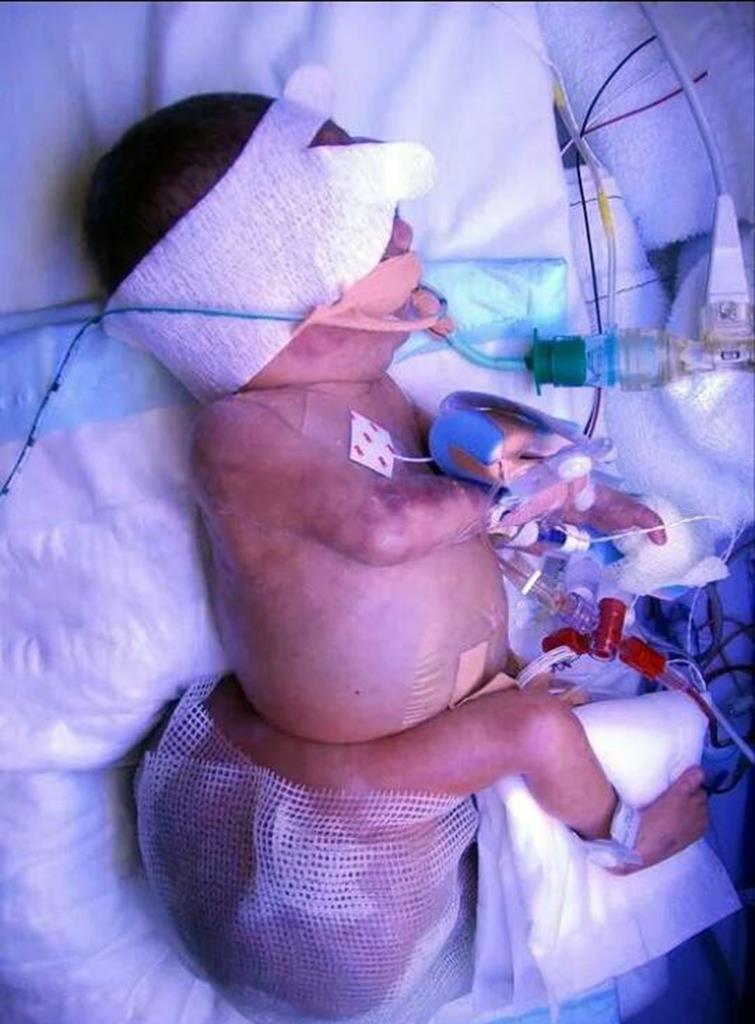 Aleyathiah with the tumor. (Photo Credit: Now to Love)

It was far too early to have my baby now, so doctors would delay labor as long as possible to give her a fighting chance. After the appointment, I fell apart. All I wanted was for my baby girl to be healthy, but now, everything was uncertain.

Because I was already five centimeters dilated, I was put on bed rest. Dan and my parents arrived soon after I had been told the news, and though they were just as worried, they tried to reassure me everything would be OK. I sought help from a social worker named Rosie, who helped me manage my stress. On a calendar, we crossed off each day I made it through without giving birth. I had to hold off until at least 34 weeks. Doctors gave me tablets to help delay it. Meanwhile, a million questions raced through my mind: How small would my little girl be, and what would happen once she was born? Would the tumor mean she had another fight on her hands?

She didn’t deserve so many traumas in her little life.

“Come on, my love,” I whispered to my bump. “Stay in there a bit longer and we’ll get through the rest together.” After five weeks on bed rest, I went into labor again. I was seven centimeters dilated. My doctor did another scan and found that my baby’s tumor had ballooned to the size of a melon and her little heart was slowing down. “She needs to come out this afternoon,” she said.

Because the growth was so big, there was a chance I’d tear if I gave birth vaginally, which could potentially kill us both, so I had an emergency cesarean section. I rubbed my bump one last time as I went under and prayed my little girl would make it through.

“Where is she?” I mumbled groggily when I woke up. “She’s in the NICU,” doctors told me. “She’s alive, but in critical condition.” There weren’t even any photos of her to show me. “Please,” I begged, terrified. “I need to see her.” “You’ve just had major surgery, you need to stay in bed,” the doctor ordered.

Finally, 24 hours after she was born, I saw my daughter for the first time.

Nothing could prepare me for how she looked when I saw her in the crib. She was so tiny and instead of having a bottom, she had a tumor the size of a melon. Doctors couldn’t determine her height or weight until they removed it, but I knew she couldn’t be more than two pounds. I was overcome with love but also terrified that I’d lose the special girl I’d only just gotten to meet.

“You’re being so brave, Aleyathiah,” I encouraged. I gave her a name as unique as she was. A doctor explained they’d need to remove the tumor and determine if it was cancerous, but only Westmead Hospital in Sydney, Australia, had the resources to perform the risky surgery. “She won’t survive a flight, and it’s unlikely she’ll survive the drive,” the doctor warned. She’d already made it this far — we couldn’t give up yet. “We have to try,” I decided. When she was four days old, Aleyathiah was taken to Sydney while I stayed behind. The drive was so dangerous that doctors needed as much space as possible to work on her if anything went wrong. 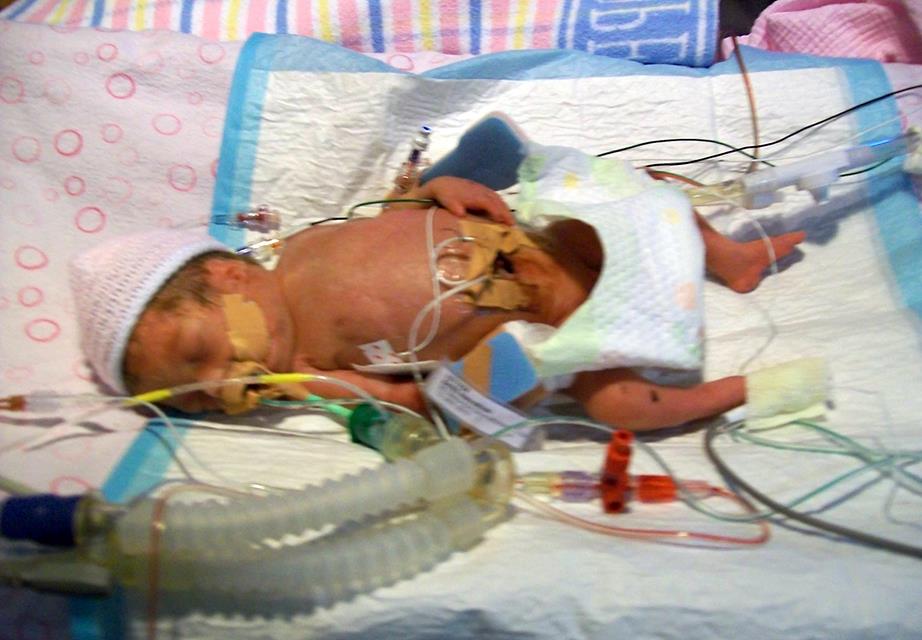 Aleyathiah without the tumor. (Photo Credit: Now to Love)

Waiting to hear if she’d made it was agonizing, but she did make it, just as I knew she would. I was flown up to be with her six hours later. Clutching her tiny hand as they wheeled her off to surgery, I realized I might never see her again. “I love you so much,” I told her, tearfully.

After seven long hours, the surgeon came out to meet me. She looked exhausted. “I’ve worked on many kids,” she said, “but this was one of the hairiest operations I’ve ever done. She lost a lot of blood, but she survived.” I breathed a sigh of relief. I was overjoyed that my girl had won her battle.

Tears pricked my eyes when I finally saw Aleyathiah after the surgery. For the first time in her short life, she looked like a normal baby — with a diaper covering her bottom instead of her huge tumor. Surgeons had reconstructed her bottom and managed to remove 90 percent of the growth. “It weighed one kilogram – heavier than her entire body,” the doctor explained.

When we found out it was benign and she wouldn’t need further surgery, I knew Aleyathiah was finally out of the woods. Holding her in my arms for the first time when she was three weeks old, I thanked her for putting up such a strong fight. Dan and my parents were overwhelmed by just how close we’d come to losing her, but they fell in love with her as soon as the shock wore off. Five months later, I got to take her home, but sadly, Dan and I had split up. 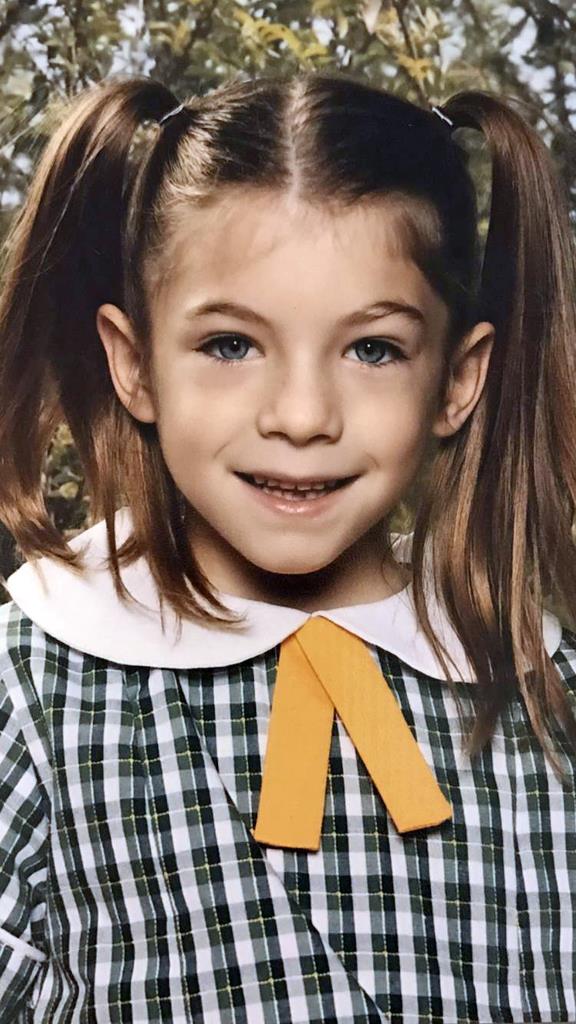 Aleyathiah is now seven years old and has three younger siblings, whom I’ve had with my husband, Jake. She still suffers from loss of bowel control and has digestion issues, but she’s a gorgeous, bright little girl. She loves going to school and, though she still depends on diapers, she has lots of friends. It’s been a long road, but my girl has come so far.

If you’d like to help out with Aleyathiah’s ongoing medical bills, go to the family’s GoFundMe page.

This post was written by the writers at Now to Love. For more, check out our sister site Now to Love.

My Mom Gave Birth to My Son

5 Baby Names That Are Banned in Other Countries