My knees bounced up and down with excitement. “How should I tell him?” I wondered. I could bake a cake, or leave a trail of Post-it notes. Then I heard a key in the front door. Before my husband Riley had even set foot inside, I found myself blurting it out.

“I’m pregnant,” I announced. His face broke into a grin. “That was quick,” he said, smiling. We’d only been married three months, and although the news came sooner than expected, we were both thrilled. Soon, my first scan date arrived.

“This is the moment you see two heartbeats,” I joked to Riley. For weeks, I’d been teasing him that we might have two, as I had twin sisters. “You’re not going to believe this,” the sonographer said. “There are two heartbeats!” “Seriously?” I gasped as Riley’s face paled. “How will we afford it?” he said in shock. “It’s a blessing. We’ll cope,” I replied.

I gazed at the grainy image and noticed something odd. “Don’t their heads look close together?” I asked. The sonographer studied the scan, then a look of concern flashed across his face. “You’re right,” he said, and he went off to fetch a doctor.

They both stared at the screen, worried frowns etched on their faces. I gripped Riley’s hand. “It looks like the twins might be conjoined,” one of the doctors said eventually. I was speechless. He told us that if they were joined at the head, they wouldn’t survive. We made an appointment to see a specialist. “Whatever happens, we’ll do our best for them,” Riley said.

I found it hard to look at the ultrasound picture we’d been given to take home. It was all very frightening. After a more invasive scan, a specialist confirmed our fears. “Will you be able to separate them?” Riley asked. “It’s too early to say,” he replied. “Sadly, stillbirth is very high in conjoined twins.”

Despite everything, I was mesmerized by the tiny miracles on the screen. “Look,” I said to Riley. “I can make out their little noses.” As time passed, we started to come to terms with what was happening.

I was monitored closely, but the pregnancy progressed well. Doctors constantly told us about all the things that could go wrong, but with every little kick, I was reminded that my babies were fighting and I should never lose hope. Soon afterwards, we were excited to discover we were having girls. Sometimes, I’d feel so lucky. Other days, I’d pass moms with their perfect babies and feel overwhelming sadness and jealousy.

At 30 weeks, I panicked when I found a damp patch in my undies. A doctor examined me and said I was 2 centimeters dilated. After that, everything happened quickly. Medics swarmed around me and I heard one of them say that the heart rate of one of my babies was dropping. “She needs an emergency cesarean right now,” a doctor shouted. Next thing I knew, I was put under general anaesthetic.

Coming around, my head felt heavy, but I quickly remembered where I was. “Are my babies okay?” I cried out groggily. “They’re being checked over,” a nurse said. “But they’re alive.” She said they’d come out kicking and screaming. Suddenly, a cot was wheeled in and placed by my bedside. “Would you like to meet your girls?” the nurse asked.

I was worried I’d be shocked by their appearance. They were face-up, joined by the crown of their heads, with their little feet pointing away from each other. But peering into the cot, I realized I shouldn’t fret. “They’re beautiful,” I said. Riley was so proud, taking countless photos.

“Would you like to hold them?” the nurse asked me. “Are you sure?” I replied. They were so fragile. “Take one in each arm,” she said, gently handing them over. I cradled my precious bundles, gently resting them in the crook of each elbow with their heads against my chest, and was overcome with love. We named them Abby and Erin. 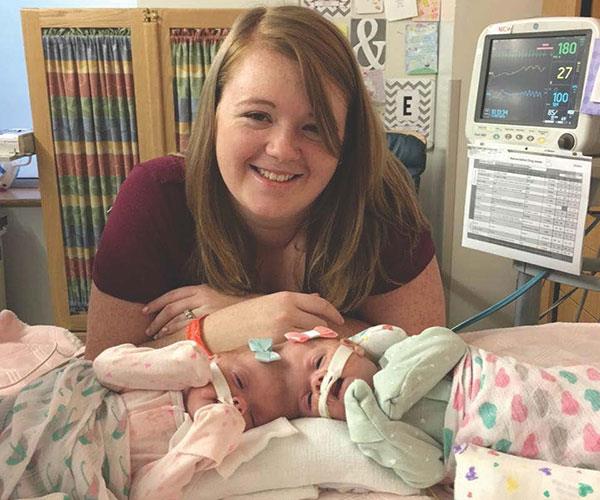 It was such a special moment, but we were far from out of the woods. As well as being conjoined, our girls were very premature. They were going to need to stay in the hospital for a long time, so I moved into a room of my own on the ward and pumped breast milk to feed them.

As the weeks passed, their personalities began to shine through. They gurgled happily and tried to smile. They may have been joined together, but they had independent streaks. One day, I was holding them while Abby had a little sleep and Erin was awake, looking around with interest. She was more curious and vocal, while Abby was quieter and laid-back.

I spent hours watching our girls interact. One day, Erin snatched her twin’s blanket off her. Instead of crying out, Abby clutched her sister’s hand. It made me realize my girls would get through this together.

Soon, they were strong enough to move out of intensive care. One day, we took them for a walk outside on the hospital grounds. They smiled and gasped as the wind blew on their faces. Then I looked up to see people staring.

A complete stranger approached us. “Can I look?” he demanded. I was so taken aback, I didn’t know how to respond. They were just innocent babies. What gave anyone the right to gawk at them? But there were more difficulties ahead. When they were 10 months old, the inevitable moment arrived. A specialist sat down to talk to us about separating them.

“There are many risks,” he told us. Although our girls had their own brains, they shared a complex network of blood vessels. “There’s a high likelihood your girls won’t survive the operation,” he warned us. Once he left, Riley and I sat there stunned. “No, I’m not putting them through it. I’m not putting us through it,” I said. “But what life will they have if we don’t separate them?” Riley said. We’d fallen head over heels in love with our girls. Imagining life without them was simply unbearable. What should we do?

My husband Riley and I looked at each other, our eyes filled with tears. If we left our girls attached to each other, what quality of life would they have? But I couldn’t bare to think about the risks that came with surgery. I couldn’t cope if we lost them. Then Riley said something I hadn’t thought of. “If we don’t go ahead with the separation, then our girls will never see each other’s faces,” he said. “They’ll never get to look into each other’s eyes.” I began to think more seriously about surgery.

The doctors had explained that although the girls had their own brains, they shared important blood vessels and a protective membrane that surrounds the brain which would have to be separated. Once that happened, their heads would be an unusual shape.

There were also ethical considerations. What would happen if one of them was faring better than the other during surgery? Whose life do they save? It was a lot to consider. One night, Riley and I were watching the girls as they drifted to sleep.

While Erin slept soundly, Abby was wriggling around and whining. “Poor angel,” I whispered to Riley. “She’s teething.” I longed to pick her up and comfort her. Every maternal instinct I had was urging me to hold her and rock her to sleep. But there was no way I could without disturbing Erin. “It’s going to get more challenging over time as they get bigger,” I told Riley sadly. “I never thought I’d say this, but we should go ahead with the separation.” Our girls had astounded us so far; I had to believe that they’d keep fighting. Riley agreed, and we set a meeting with the surgeon.

“What would it involve if we went ahead with the operation?” I asked. “First we’d need to expand the skin on the twins’ foreheads,” he replied. He explained that this would be done by placing two inflatable balloons known as expanders under their skin. Over time, these would slowly be filled up, stretching the skin. The excess would then be used to cover the wound left by the separation. “Once the balloons are inflated enough, we’ll book the girls in for surgery,” he said. Riley and I looked at each other and nodded. “Let’s do it,” we said in unison. Soon, the girls had their expanders fitted. 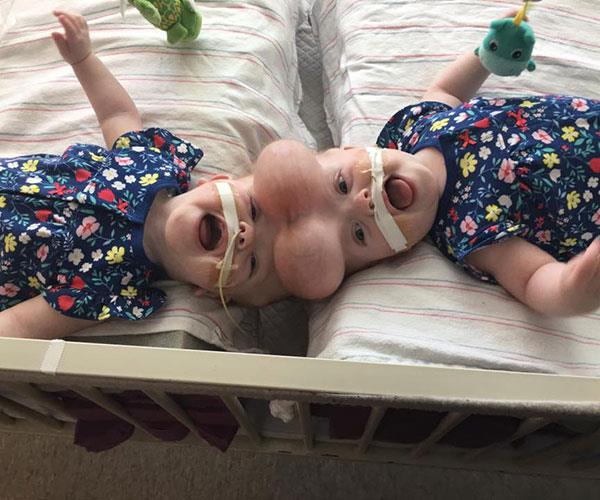 By now, they were at the age where they were itching to explore. I could see their frustration when they tried to roll over, or wanted to grasp a toy that was out of reach. “Soon you’ll be able to do this on your own,” I told them.

Their surgery date arrived and Riley and I walked alongside our girls as they were wheeled in. “Mummy and Daddy love you very much,” I said. “We’ll see you both very soon.” Then the doors closed and all we could do was wait and hope.

Over the next 11 hours, a team of 30 doctors worked to separate our girls. The wait was agonizing. We sat outside, clutching each other’s hands, unable to speak.

Then a nurse told us the neurosurgeon wanted to see us. My heart leapt into my throat. As we approached him, I clenched Riley’s hand tightly. “How did it go?” I asked. “How are they?” “The surgery went well,” he replied. “But they’re very weak.” Abby in particular had lost a lot of blood. “We’ve placed them in an induced coma to encourage their bodies to recover,” he explained.

We were taken to see them. Their heads were heavily bandaged, their eyes were shut, and they were attached to machines. But their hearts were beating by themselves. “They’re alive,” I cried, falling into Riley’s arms.

Later, standing between their two incubators, it suddenly hit me. Our two girls were now separate and independent of each other. “It sounds odd,” I said, “but they look lonely without each other.” For the last 10 months, I’d gotten used to managing two babies at once. I could change Erin while chatting to Abby. Now, everything had changed and it would take some getting used to. But that was a challenge for another day. My precious girls were still very fragile and both had moments where we thought they wouldn’t make it.

But Abby and Erin refused to give up and they became stronger and stronger. Three weeks after their operation, they were woken from their coma. As their tiny eyelids fluttered open, it felt like time stood still. They continued to improve, and a week later, I held Erin by herself for the first time. Cuddling her, I burst into tears. “Look how far we’ve come,” I said. 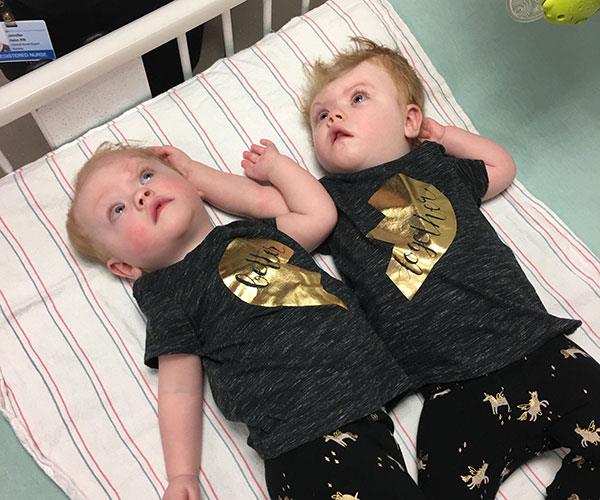 Because of their complex condition, my girls still needed specialist care and constant monitoring. But after 485 days in hospital, Abby and Erin finally came home. Now, they’re 18 months old, and I couldn’t imagine life without my two mischievous munchkins.

They’ve just started rolling over by themselves and are always babbling to one another. Sometimes, I even catch them falling asleep holding hands. Developmentally, they are slightly behind other tots, but doctors aren’t too concerned.

Over the next few years, the girls will need further surgery. We’ll never be certain what the future holds. But as long as they have each other, I know my girls can overcome any obstacle.

This post was originally written by Heather Delaney. For more, check out our sister site, Now to Love.