Prince William and Kate Middleton traveled to Birmingham, England on November 22, commencing the first leg of their West Midlands tour. William and Kate, both 35, kicked off the day’s events with a visit to the Jaguar Land Rover’s Solihull Manufacturing Plant, where they tried their hand — rather successfully, we might add — at off-road driving.

The royal duo were also given an overview of the site before viewing the assembly line, hearing about the manufacturing process, and meeting staff and apprentices at the location. 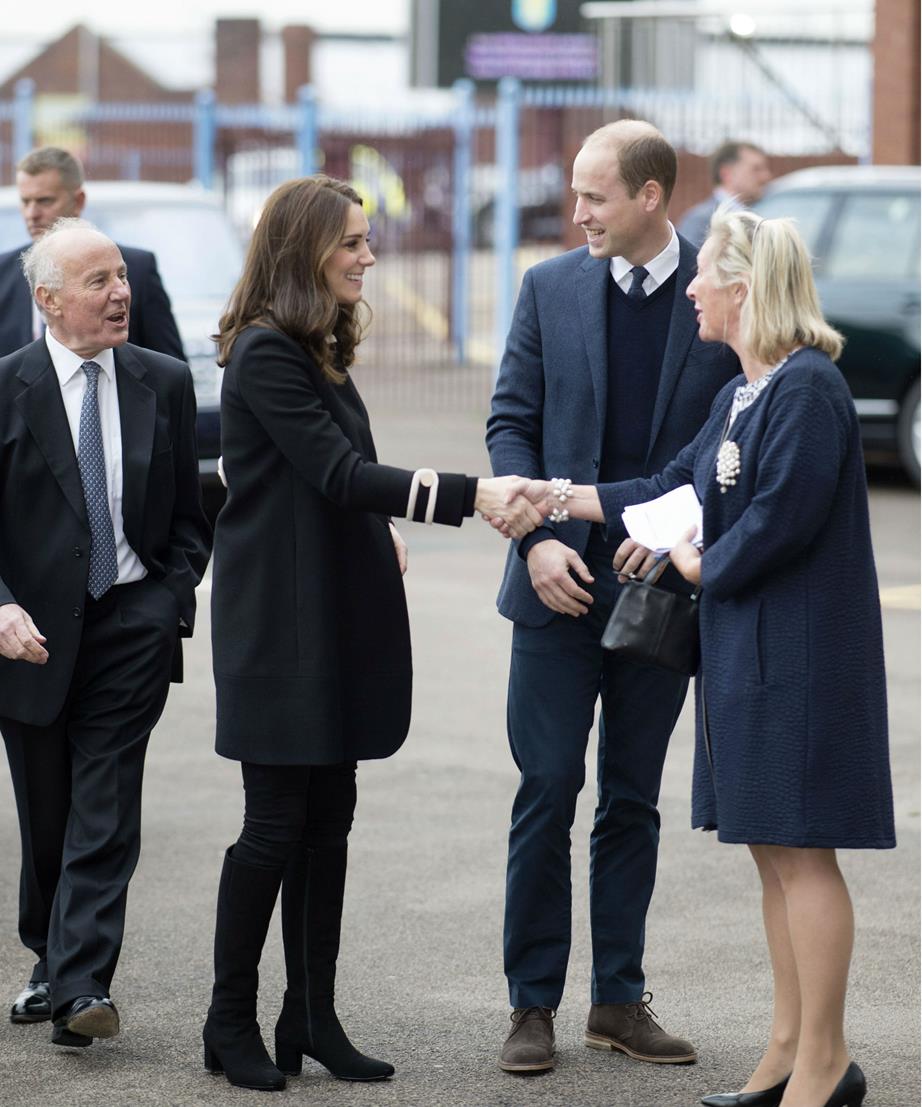 The royal duo began their jam-packed day with a visit to the Jaguar Land Rover’s Solihull Manufacturing Plant. (Photo Credit: Now to Love)

Kate, who is pregnant with her third child, due in April, opted for a black coat with military-inspired accents by Goat and a pair of knee-high Russell & Bromley boots for the occasion. The couple next made their way to Aston Villa Football Club where a quick change of clothes readied them for a more hands-on engagement.

The duchess swapped her designer coat for a black turtleneck sweater, bright-red puffer jacket, skinny jeans, and tennis shoes. Of course, all eyes were on the royal’s growing baby bump, which was clearly visible beneath the form-fitting look. 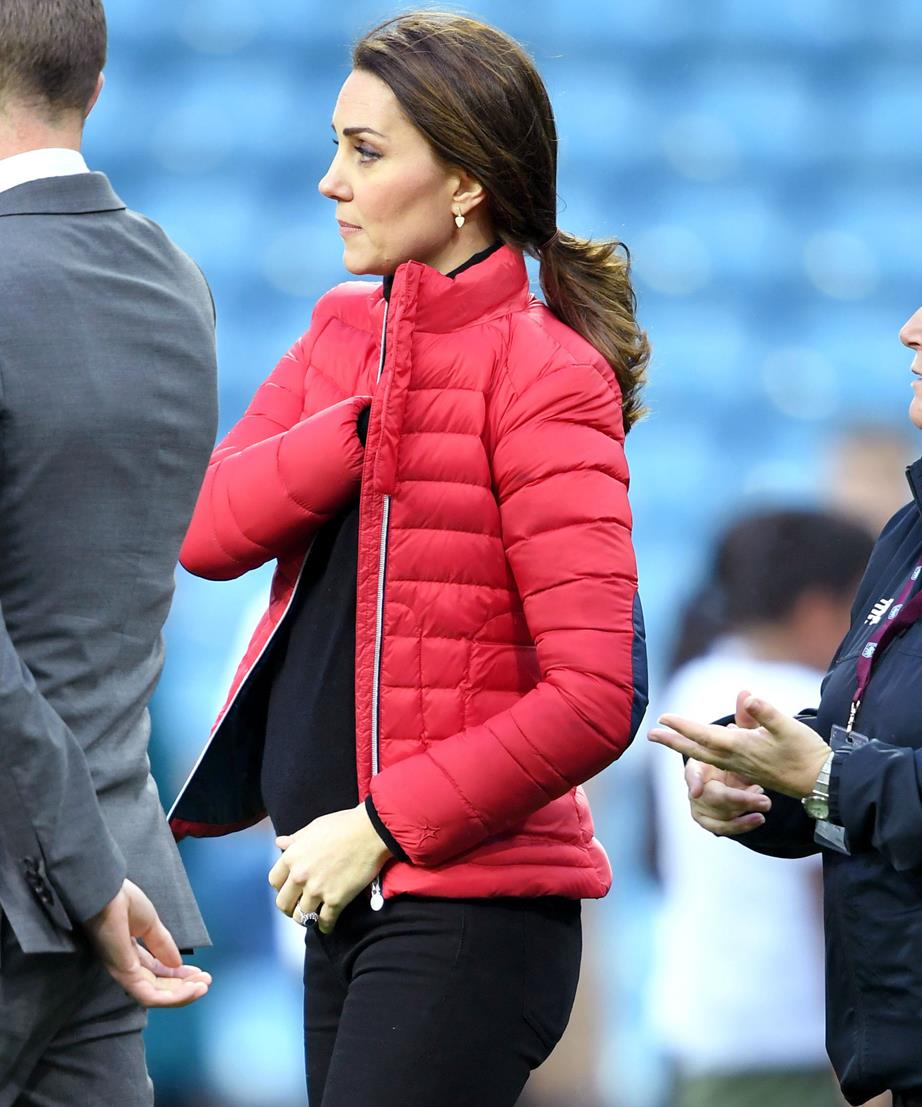 Meanwhile, the duke changed out of suede boots and into a pair of brightly-colored sneakers. He also added a navy puffer jacket, which would have provided a touch more flexibility than the blazer he had worn earlier in the day.

The expectant parents met with employers and sporting groups before taking part in an on-pitch training session with local children. Sidrah Batul, a student present at the event, later spoke about her interaction with Kate.

“She was asking me if I enjoyed it, and I said I was having a lot of fun,” the 10-year-old said, according to the Daily Mail. She added: “She’s so kind and pretty.”

Later in the day, William and Kate stopped by Acme Whistles — the creator of the first police whistle. 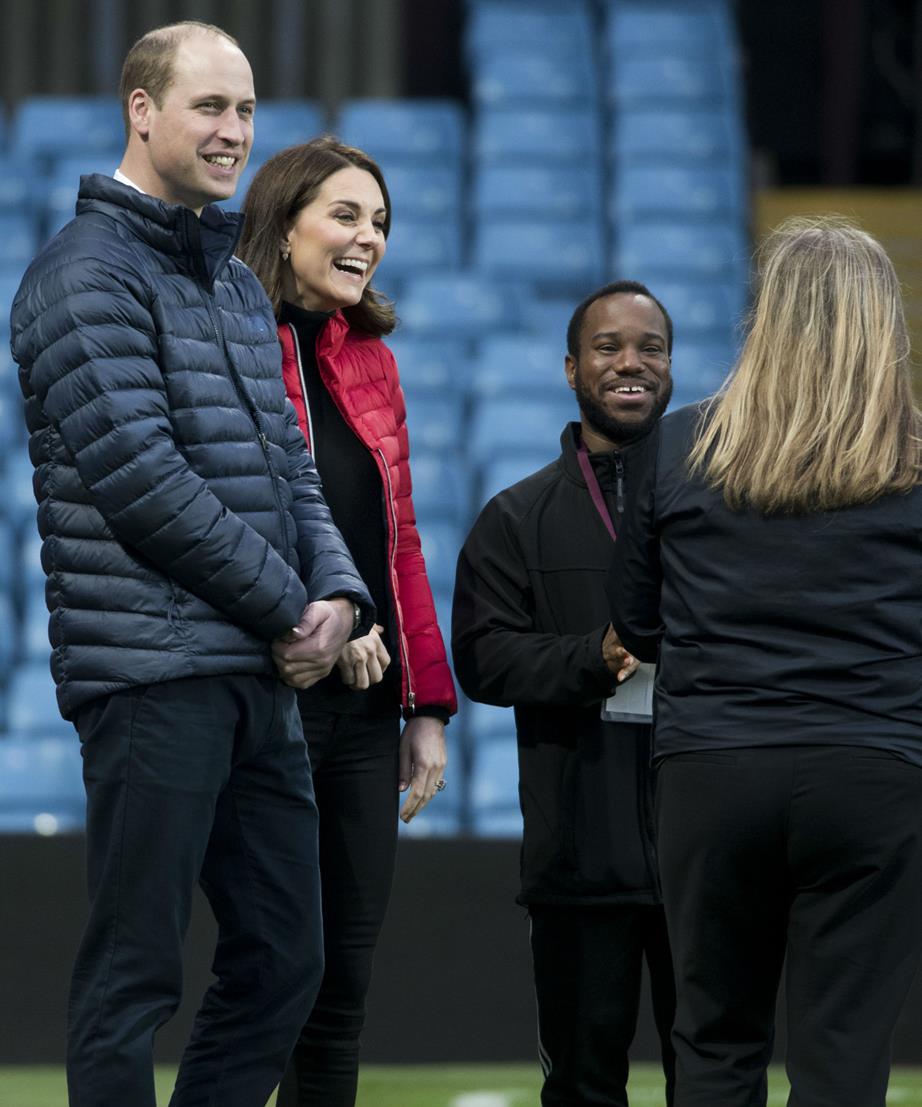 The expectant parents spoke with employers and sporting groups at the hands-on engagement. (Photo Credit: Now to Love)

The mom to Prince George, 4, and Princess Charlotte, 2, has been forced to miss a number of important events in recent weeks — including her son’s first day at school — due to extreme morning sickness, or hyperemesis gravidarum, the same nasty condition she battled with her two other pregnancies.

But, it looks as if she’s on the mend! Kensington Palace has begun to once again announce the royal’s appearances ahead of time, suggesting that she’s feeling well enough to schedule and keep forthcoming engagements.

Kate and William’s third little prince or princess is due to arrive in April 2018. Although they haven’t yet confirmed the exact due date, there’s a chance the newest royal addition could share their birthday with their great grandma, Queen Elizabeth, who will turn 92 on April 21.

Or, if the royal baby were to arrive later in the month, their grand entrance could coincide with the duo’s seventh wedding anniversary on April 29.

We can hardly wait!

Kate Middleton Glows as She Bonds with Fellow Pregnant Moms