Kate Middleton has stepped out for a cause that’s close to her heart — children’s mental health. Arriving to the Roe Green Junior School in London, England, on Tuesday, January 23, the royal mother-of-two was greeted by more than 100 children before she took part in a lesson designed to help support children’s mental health and well-being.

The 36-year-old highlighted her growing baby bump at the engagement with a powder blue dress by Seraphine and a recycled Sportmax coat that she first wore while pregnant with Princess Charlotte in 2015. She accented the look with a Tanzanite Pendant Necklace and matching earrings by G. Collins & Sons.

During the event, Kate delivered an emotional speech that touched on the difficulties of parenting. She explained to the audience that becoming a parent has sometimes left her feeling a “lack of confidence” and “feelings of ignorance.”

“What does it mean to be resilient?” Kate asked the students. “We know that mental health is an issue for us all — children and parents, young and old, men and women — of all backgrounds and of all circumstances. What we have seen first-hand is that the simple act of having a conversation about mental health — that initial breaking of the silence — can make a real difference,” she continued. “But, as you here today know, starting a conversation is just that — it’s a start.” 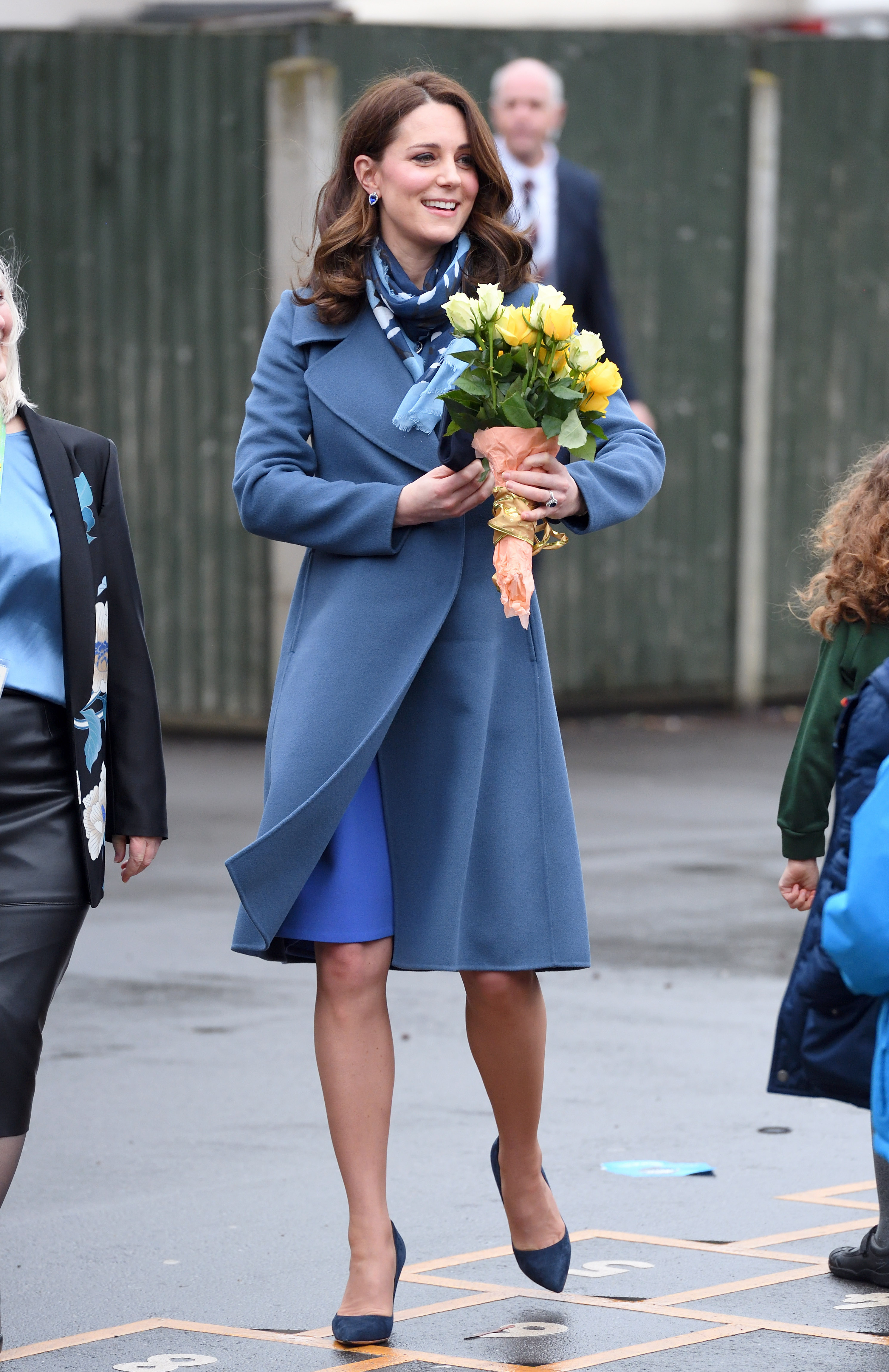 Kate was also there to launch Mentally Healthy Schools, a website aimed at giving teachers resources to help support the mental health of their students. The site is part of the Heads Together initiative founded by Kate, Prince William, and Prince Harry.

The mother of Prince George and Princess Charlotte is expected to welcome her third little prince or princess in April, but she shows no signs of slowing down. Kate and William are currently preparing to visit Norway and Sweden on official royal duty from Tuesday, January 30, to Friday, February 2.

“My own commitment is to the youngest, most vulnerable in their early years — babies, toddlers and schoolchildren,” Kate says as she launches Mentally Healthy Schools project for @heads_together. Via @people @PEOPLEroyals pic.twitter.com/F1NeWXMQp4

Their royal tour will consist of many routine activities such as meeting and dining with fellow royals, walking around, and viewing galleries and gardens. The Swedes have also decided to bump it up a notch and have the royal couple join celebrities Stellan Skarsgård and Alicia Vikander at a swanky black tie dinner at the residence of the British Ambassador.

Norwegian fans shouldn’t worry about the couple spending all their time inside. William and Kate will sure to be dazzled by Norway’s stunning views. It’s believed George and Charlotte will remain at home to focus on their schooling.

Kate Middleton Glows as She Bonds with Fellow Pregnant Moms