There’s nothing we love more than a good puzzle or brain teaser to help keep our minds sharp. A new riddle making the rounds on the internet will definitely put all your mental muscles to the test.

Posted in an online forum called Mumsnet, this riddle focuses on a horse — or more specifically, the very complicated buying-and-selling strategy of said horse. According to the original poster on the forum, quite a few people on social media websites got the answer completely wrong, and — as people on the internet are wont to do — were trying to justify the wrong answer to the crowd.

Take a look at the riddle for yourself below and see if you can find the right solution. Bonus points if you can spot what tripped so many people up. 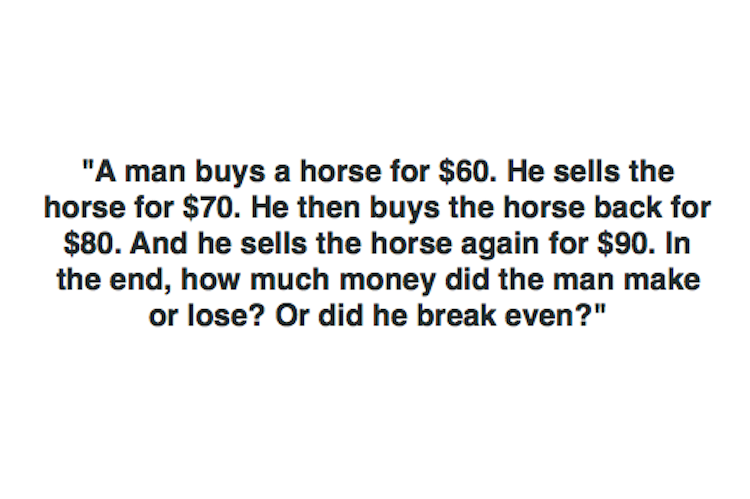 Having a tough time with this one? If so, you’re definitely not alone. Although it might appear simple at first glance, this riddle has a sneaky twist to it that can trip you up if you’re not following along closely with every step — and maybe if you forgot to take notes along the way.

As it turns out, the answer is that the man ultimately ended up making $20 as a profit. To see how that works, you need to take a look back at the first transaction he made; remember that he made $10 the first time around. Then, you have to separate the second (confusing) transaction into two parts; he bought for $80 and then sold for $90, so that’s another $10 tacked on, giving you the total.

As Hello Giggles reported, a big part of what confused a lot of people is that this (again, very confusing) man sold for $70 and then bought back for $80 — making it seem like he lost money instead of gaining it.

Give yourself a round of applause if you were able to solve it. And if, for some reason, this riddle was inspired by an actual series of transactions over a horse, we sure hope it was worth it for the man!