There’s something special about sitting down with all your friends to watch your favorite football team take the field, and this year it’s all about the homemade tailgate. Called “homegating,” tailgating at home is the next best way to cheer on your team without actually picking up a pair of pom-poms on the sidelines. And for those who love the party more than the plays, homegating also provides the perfect excuse to kick back with a Moscow Mule instead of forking out hundreds for NFL tickets. We talked to fashionista, restauranteur, and homegating expert Giuliana Rancic to get exclusive tips and tricks about how to throw your own homemade tailgate.

Just a couple weeks ago, Giuliana teamed up with Chicago Bears legend Anthony “Spice” Adams and the NFL to throw a special homegate for fans, complete with decorations and spirited swag from NFLShop.com. But your own homegate doesn’t have to be quite so fancy — and Giuliana knows all the secrets.

“My husband Bill Rancic, of course, is a big Bears fan,” Giuliana explains. “We’ve had a chance to meet some of the players… living in Chicago now… and meeting a lot of people behind the scenes made me love the Bears as well.” Of course, you don’t have to literally know the players the way Giuliana does (after all, we can’t all rub shoulders with Spice Adams!). But knowing who you’re rooting for can make a big difference when watching the game. First of all, it’s easier to be invested when you can put some faces to the team. But it’s also a great conversation starter when you can chime in about how players are performing — and who just caught that awesome pass.

You don’t necessarily need to go out of your way to deck our your TV room in your team’s colors, but homegating is by no means the same as sitting on the couch with the game on. Instead, small touches around the room can help bring your party together. For Giuliana, some of her faves include the NFL shop items — especially Moscow Mule mugs with your team’s logo and a good branded blanket.

“It all elevates your party, and it shows people that when they come over this is an actual event we’re having here. It just really brings that whole feel of the tailgate into someone’s living room,” Giuliana shares. “People come over and we have some of the [Bears] products out, and people love it. People comment on it, they’re a good conversation starter and they just put everyone in that great spirit.”

But if you don’t have just one home team, you don’t have to miss out on the fun. Instead, nice serving plates to arrange snacks on can go along way. So can cutting boards, or your own Moscow Mule mugs. Red solo cups and paper plates are always easy — but a little extra effort can go a long way in the comfort of your own home. 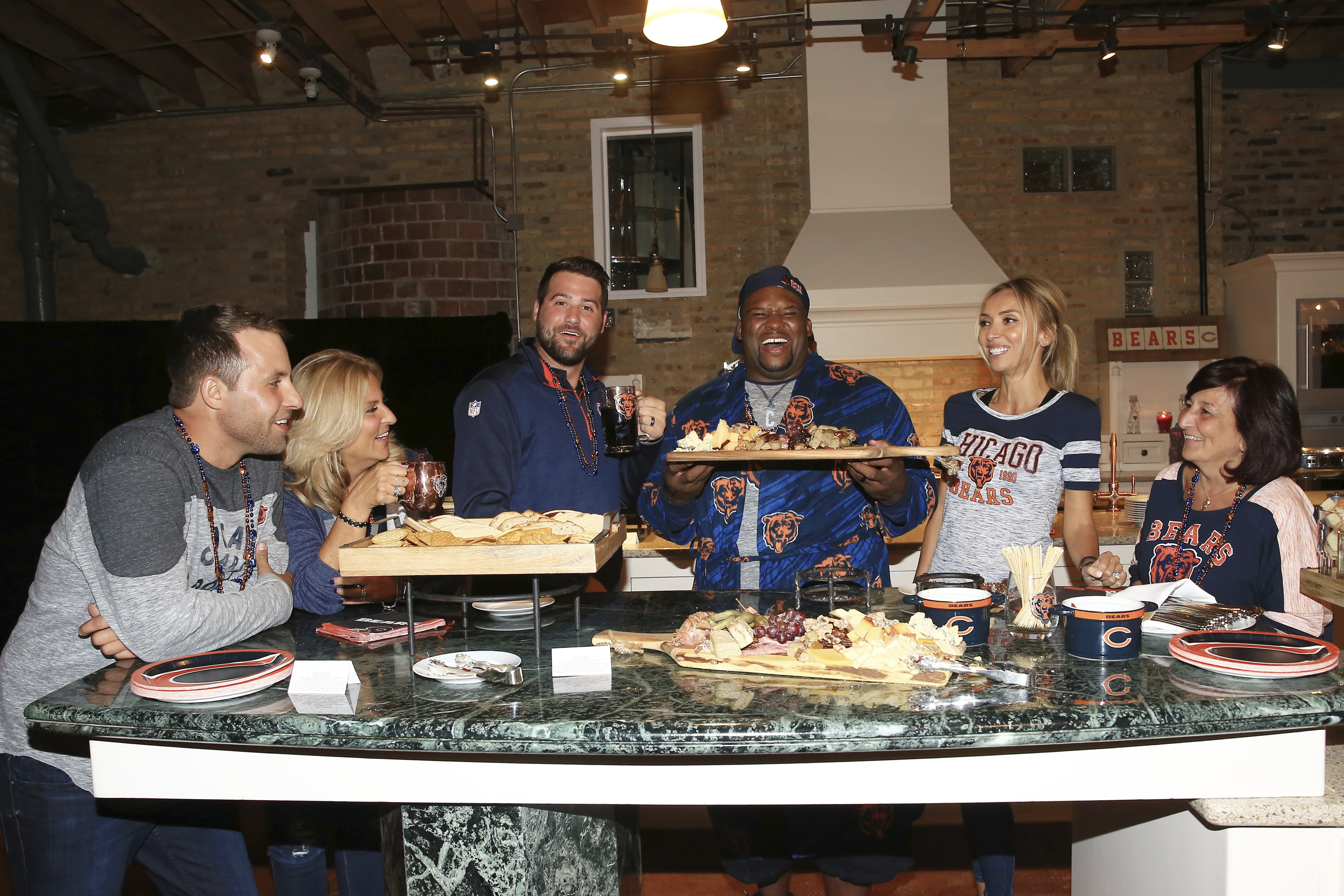 And yes, we do mean those spirits. Introducing your own game day cocktail can also be a fun way to keep the party festive, whether you’re theming it after your favorite team, favorite player, or favorite play. But for Giuliana, she likes to keep a variety of beverages on hand. Moscow Mules, of course, but also beers for the beer drinkers, white and red for the wine drinkers, and a little something extra special for touchdown moments. “I love prosecco and it’s very refreshing,” the fashionista admits. “It’s bubbly, so there’s kind of a celebratory feel to it if you will.” And of course, make sure to have some non-alcoholic drinks on hand for the kids and those who would rather not imbibe.

Not everyone is going to be that invested in every game. Instead, keep a couple activities around for people who aren’t so set on keeping an eye on the score. That can mean board games to keep the kids busy, or something a little more adult-friendly, like Cornhole — or, as Giuliana calls it, Baggo. “That’s a fun game and we were playing that [at our NFL homegate],” the hostess shared. “Everyone was getting in on that game, that was a lot of fun.”

You can also keep your family standards on hand, whether you love to play a little game of pick-up in the backyard or cards around the table. Offering something for your guests to do besides just tuning into to the game means no one ever gets bored — no matter how long that time-out lasts. 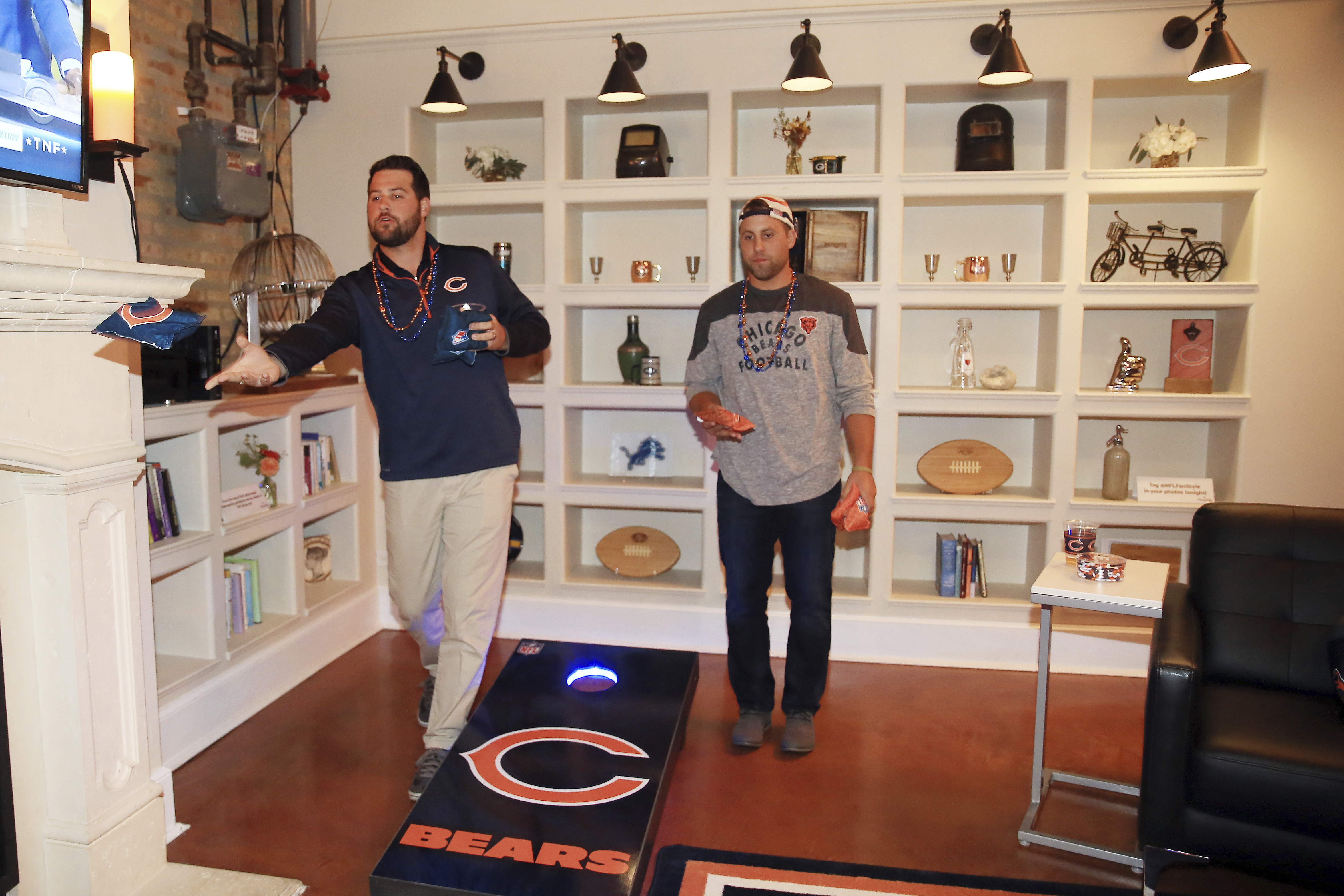 Who could forget the food, one of the most important parts of tailgating and homegating? The classics, of course, include hamburgers and hot dogs. But the Rancics like to take things up a notch by tossing some steaks on the grill or picking up a pasta dish from one of their restaurants, RPM Italian. “I know that a lot of people wouldn’t think of pasta night to go with football, but my mom taught me how to make her signature pasta which is called Mama DePandi’s Bucatini… It’s our bestselling dish at RPM Italian and it’s incredible.”

Sometimes, she’ll even make it herself at home. “My husband and I love to cook together… Bill loves to grill… So he handles more the steaks, burgers, sausages, hot dogs, things like that. And then I’ll do more like the pasta, the sides, salad.” For them, it’s all about setting the mood. “We create a setting where we can also catch up, my friends can catch up and then check in on the game, and then the kids are running around… I just think there’s just something about having the game on and having people over, which is just a great way to spend a night or an afternoon.”

38 Hot Dog Recipes That Will Win Over Even Burger Fiends