The human body truly is an amazing thing, especially the female human body. Just when you thought that getting pregnant with your own child while carrying someone else’s child never happens — it does. And no, this is not the plot of a new sci-fi film.

California mom Jessica Allen thought she was carrying the twins belonging to a Chinese couple who she agreed to be a surrogate for. In December of last year, Allen gave birth to two baby boys and handed them over to their parents.

It wasn’t until she saw a photo of the growing boys sometime later that she noticed something wasn’t right. Telling ABC News, Allen noticed that one of the babies had distinctly Chinese features and the other did not. “You know, obviously they were not identical twins,” she said.

Allen and her husband, Wardell Jasper, later learned through DNA testing that one of the boys belonged to them. The couple then entered a long and emotional legal battle to get their son back. “I carried my own child, and I didn’t know he was mine,” Allen told ABC News through tears.

The couple were finally granted custody of their little boy in February, and they named him Malachi. Although it’s wonderful news that Malachi is with his true mom and dad, it is perplexing how this situation came to be in the first place. 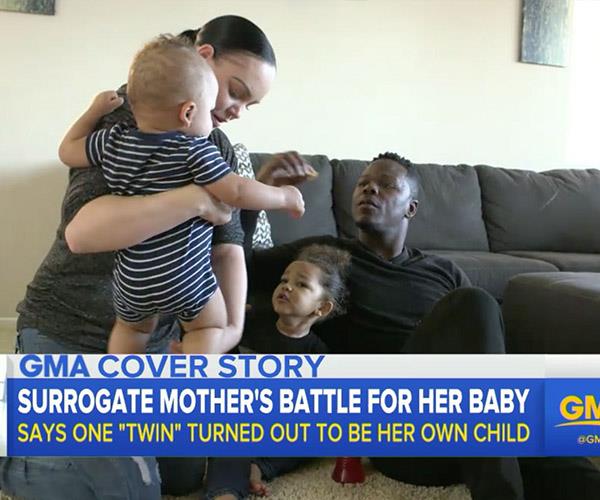 Jessica Allen got the shock of a lifetime when she learned one of the “twins” she was carrying as a surrogate was biologically hers. (Photo Credit: Now to Love)

Superfetation is a medical phenomenon where a woman continues to ovulate after becoming pregnant. It’s extremely rare but, in such cases, fertilization and implementation of a second embryo can result in two babies with different gestational ages. In Allen’s situation, there were also two different sets of genetic parents.

The couple, who were married in April this year, explained to the New York Post that they weren’t planning on expanding their family so soon. But now that they have Malachi in their lives, they would not have it any other way. “We treasure Malachi with all our hearts,” the happy mom said.

Mario Lopez Looks Like His Son’s Twin in Throwback Photo

Boy Visits Grave to Tell His Twin All About Kindergarten