By Jennifer Digmann as told to Lambeth Hochwald

When I met my husband, Dan, at a National Multiple Sclerosis Society event in 2002, I had been coping with multiple sclerosis (MS) for many years. I was diagnosed when I was 23 years old — months after I graduated from college — and, with my kind of MS, known as secondary-progressive because of its debilitating side effects, I was already in a wheelchair. Dan had been diagnosed with what’s called relapsing remitting MS two years before we met, which means he has episodes of new or worsening symptoms followed by periods of recovery.

We talked for a while that day and exchanged numbers — we both knew we wanted to keep talking. At the time we were living in different parts of Michigan, but we felt a connection. To be honest, I never thought I’d meet anyone, let alone get married. After all, I was this single woman in a wheelchair — but then I attended this MS event and met this incredible man. One thing led to another, before long we were dating, and, in 2005, we got married.

Yes, both of us have MS, but our diseases aren’t the same. While my MS is progressive, Dan can walk and drive. While he has to take medication, his MS mostly affects his hands and feet, which often feel numb. When he’s really tired, he feels numbness in his chest.

Finding Joy in the Little Things

Because I’m not able to do as much as Dan, there’s no way we can split tasks 50/50, but Dan will always counter that what I do is so important. I go to the grocery store and I do things like keep track of events and birthdays, but Dan does everything for me. He helps me with everyday tasks like bathing and dressing as well as transferring me into bed and helping me use the restroom at the times when my caregivers aren’t at the house (they help out for seven hours during the workday while Dan works as a freelance writer).

I also can’t cook for myself, I need help brushing my teeth, brushing my hair and putting on makeup, and I can no longer drive, so Dan or my caregivers take me to out to do errands.

What I try to focus on is making Dan happy. I try to treat Dan to small surprises when I can. For example, he loves licorice, so when I go to the grocery store, I’ll sometime pick some up. He gets so excited. We love baking together and even though I can’t do the mixing, I play the role of sous chef and make sure we have all the ingredients for whatever we’re making. But as much as we are caregivers for each other, the core of our relationship is that he is my husband and I appreciate him.

We find joy in just having fun together, whether that’s grilling outside in the middle of winter, spending time with friends over pizza and beer, or traveling to MS community events. The support from the MS community means so much to us. I’m in a wheelchair and Dan is living with a chronic illness, so we don’t want to hole up in our house. We want to stay involved in the community, and — as long as the place is wheelchair — I want to be out of the house. 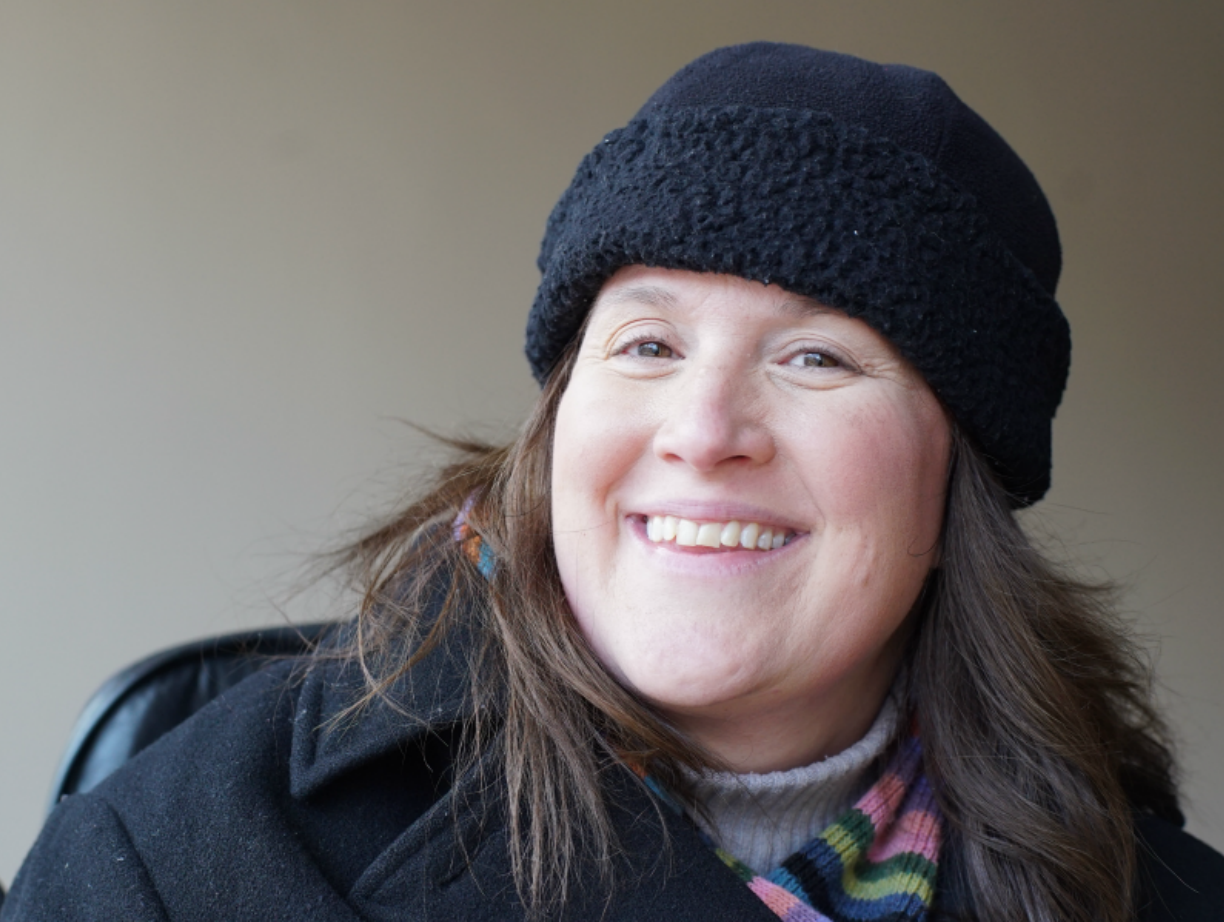 We’re like a regular couple in that we love spending time together watching sporting events. Dan will also indulge me and watch Wheel of Fortune with me every night. I love game shows!

Despite my disease, I’m very happy and really busy. It’s crazy to think that it took this disease to open so many doors for me. For example, Dan and I have become advocates and were just in Washington, D.C., advocating for the National MS Society. That was amazing. We were all wearing orange. It was so empowering; we felt we were making a difference. We are frequent speakers and advocates and also service as district activist leaders and members of the government relations committee for the National MS Society in Michigan.

In addition, we write an MS blog, host an online radio show, and co-wrote a book called Despite MS, to Spite MS, a collection of personal stories about our life together with MS.

I can’t say enough how much it helps to have a partner with the same disease. For example, recently I’ve been dealing with a bit more weakness in my right hand, which has always been pretty strong. It’s frustrating and a little scary, I won’t lie, when it’s nine at night and my hand is in a fist and I can’t get it to open. Because Dan understands what this is like, I can ask him what we can do about this and we’ll talk about how I have to keep exercising and that I can never give up.

The fact that both of us have MS means that we have a built-in support system. It helps that Dan understands what it means when I say ‘my hands are numb’ and I get it when he says ‘my hands aren’t cooperating.’ A spouse who doesn’t live with the disease probably wouldn’t understand how this feels.

By Jennifer Digmann as told to Lambeth Hochwald

March 28 is Progressive MS Day, a day created to show support, offer education, and call for more research to advance care and reduce disability for those with the most debilitating forms of Progressive MS. Learn more here or in the video below.

5 Questions Every Woman Over 40 Should Be Asking Her Doctor

I Faint Every Time I Get a Shot