If you’ve ever wondered what the white stripes on chicken breasts are, prepare to be utterly disgusted. As it turns out, these marks do not belong on chicken — not even raw chicken. Instead, they’re a telltale sign that something was wrong with the bird’s muscles.

Sponsored
Loose Jowls? Do This Every Day
Why Celebrities Are Turning Away From Surgery And Trying This Instead
LEARN MORE

A raw chicken with a white stripe means that the bird had a muscle disorder while alive, which could in turn affect your nutritional intake, according to a 2013 study published in the Italian Journal of Animal Science. Though there’s no reason to panic and throw away tonight’s dinner, the news isn’t exactly great either. 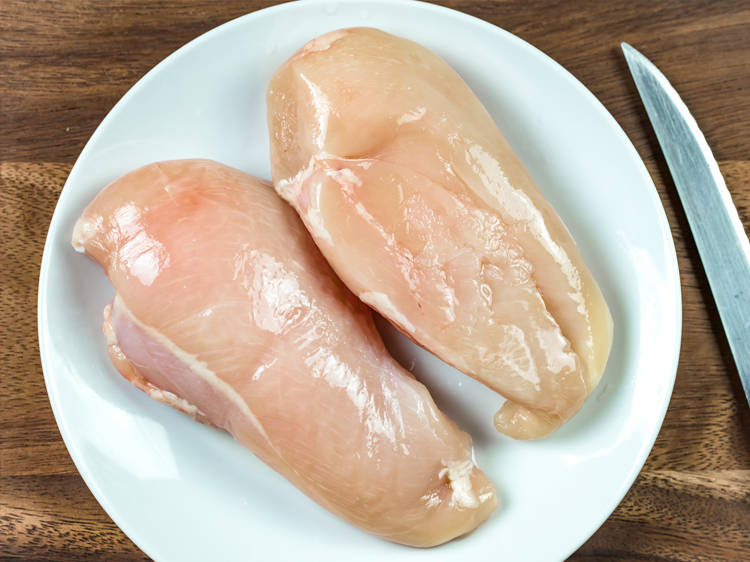 The white stripes form on the chicken’s meat when the muscle disorder develops. Scientists believe that the condition happens when chickens get too big in too short of a period of time. This disorder ups the fat content of the meat by a whopping 224 percent and lowers the amount of protein, which is one of the biggest nutritional benefits we normally get from eating chicken breasts. On top of that, a 2016 study by the University of Arkansas and Texas A&M says this condition also “negatively impacts meat quality” by affecting several cooking factors, such as decreasing its marinade uptake.

So essentially, not only do the white stripes make chicken a less healthy option to eat, they also make it taste worse than it would without them. Unfortunately, experts at the University of Arkansas and Texas A&M have warned that this condition may become more common in chicken meat as time goes on. After all, Americans are consuming more and more chicken — the average American eats an estimated 91 pounds per year — so this higher demand may encourage farmers to produce bigger birds in less time. And with these big birds may come bigger muscle problems. In other words, don’t be shocked if you start seeing more white stripes on chicken breasts in your local grocery store.

Though a spokesman for the National Chicken Council told BuzzFeed that these white stripes only affect a “small percentage of chicken meat” and that a stripe “does not create any health or food safety concerns for people,” it never hurts to be mindful of the products we put into our bodies. As long as it’s not breaded or fried, chicken remains an overall healthy food choice.

Next, learn which foods are sneakily raising your grocery bill below.