It’s every neighbor’s worst nightmare. You’re out mowing the lawn and see the teen girl who lives by you (and babysits your children) smoking a cigar.

MUST-SEE: Texas Mom Finds Drugs in Teen’s Bedroom, But the Girl’s Explanation Is Even More Shocking

Sarah was stunned to receive a text message out of the blue from her neighbor Amy, whose husband Randy had alerted her to Sarah smoking “a cigar of some sort” while on the road. And Amy had a startling request for the teen on other children’s behalf. 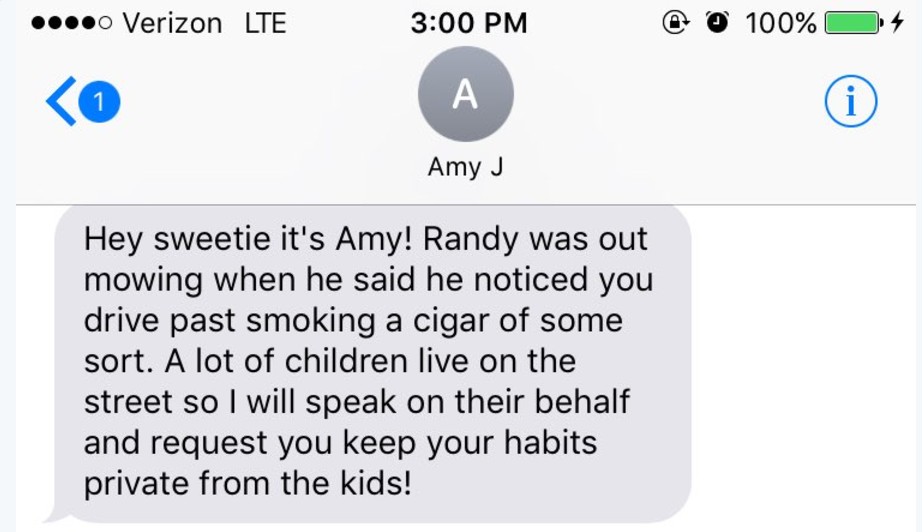 The reason why this text message was so shocking to Sarah was because not only was she not smoking a cigar, she wasn’t smoking anything at all.

She was eating. Specifically, she was noshing on a taquito, a small, rolled-up Mexican tortilla with filling. And she was quick to point out the truth to Amy, with photographic evidence included.

my whole neighborhood gossiping about my "smoking habit" ….. pic.twitter.com/EuqBMpS7YJ

And her neighbor had nothing to say after that.

“I feel bad, because in my opinion [my neighbor] is crazy nice and I get where she’s coming from,” Sarah said. “She hasn’t responded, I’m assuming out of embarrassment.”

But people all over the Internet have sure been quick to put their two cents in about this story. What started as a simple exchange went viral in a matter of hours. And they’re still talking! Sarah’s original tweet has been retweeted more than 61,000 times and favorited more than 300,000 times.

According to Sarah, most people find the story as hilarious as she does. Hopefully, her neighbor will be able to laugh about it soon, too!