Everyone who’s suffered through braces has their own embarrassing photos, but this before and after photo just might take the cake. Trust us, you have to check out these new pearly whites!

We know kids aren’t always the kindest, but poor little Evan Hill has endured years of taunting from his bullies for his large front teeth. Cruel middle schoolers have teased him relentlessly, calling him “rabbit kid” for his buckteeth.

But trust complete strangers to carry out the most inspiring acts of kindness and prove that the world is full of good, selfless people! Touched by his story, many began to send in donations for the 12-year-old to finally have the orthodontic work his family were unable to afford.

In almost no time, he’d been generously given over $100,000 to rework his smile. Amazing!

“I don’t know where we would have been today without the generosity we had,” Evan’s mother Barbara told Newshub.

“We looked at probably mortgaging our house to pay for them but this came up and blew me away.”

During monthly visits over the past five years, orthodontist Ronald Sluiter worked on shifting back his front teeth by 15 millimetres (about half of an inch), and with the help of braces transformed his bullied smile into a source of confidence. No pain, no gain, right?

“We’ve come a long way haven’t we,” the specialist says to Evan in a clip (above) where he can be seen removing his braces for the first time.

Now, as he looks at his winning smile, he has only one word to say: “good!”

The best part of this inspiring dental makeover? The remainder of Evan’s smile fund will be distributed to children alike whose families can’t afford dental care. 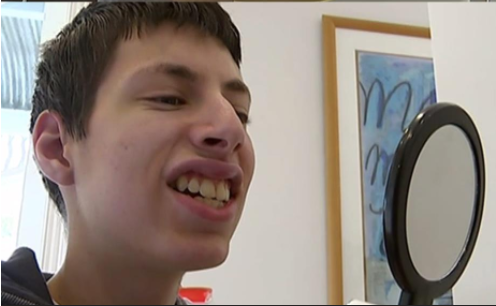 What a great smile!

Once Too Big for a Roller Coaster, Woman Loses 98 Pounds With Healthy Makeover

Keep scrolling to see the most inspiring smile makeovers!